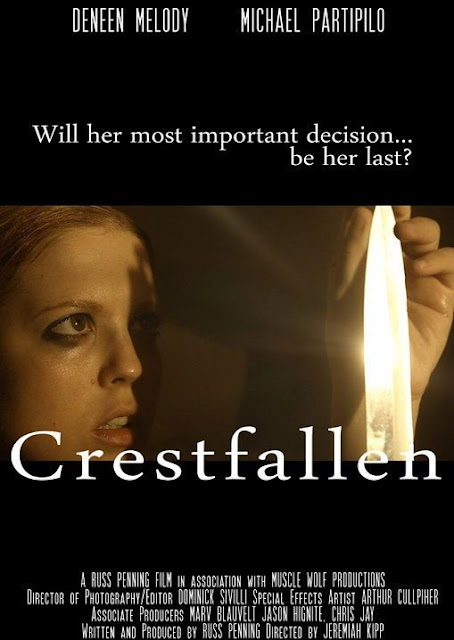 Movies that tell a story without words are some of the most powerful.  Because there are no words, the visual palate of the film must paint its imagery all the more vividly in the mind of the viewer.  Crestfallen is just such a movie that, in the end, makes us feel we’ve heard everything spoken…and seen far more—that is, far more than what we we’re shown.   In only 6 minutes, the movie tells a story of depth and emotion that seems to have lasted much longer.


Crestfallen begins with scenes from someone’s life, familiar enough that they could be our own or from someone we know.  A montage of memories—images of love, marriage, happiness, and joy—are mixed with music that’s ethereal, and suddenly ominous, in a loop that leads us to something surely foreboding.  A woman enters a room, becomes a silhouette and disrobes, almost as an angel.  The only light from a window makes the scene both heavenly and gothic; mystery and desolation are, again, more telling of something less than happy ahead.  The woman submerges herself in the water of a tub in darkness, and emerges to bathe her face in light; yes, the juxtaposition of contrasts is consistent and sets the tone well—musically, physically, and emotionally.  (It’s a metaphorical light and dark difference as a theme.)   The woman studies a dagger, as if it’s sacred, turning it to reveal its angles as it shines in the light.  Next, a coup de gras moment floods the screen with more memories—those of despair, betrayal, and regret—along with the blood of her mortality; blood mixes with water, revealing more memories as it spreads.   As the camera tilts and turns, we feel the woman’s life draining from her—the disorientation and surreal moments of death (or so we think). 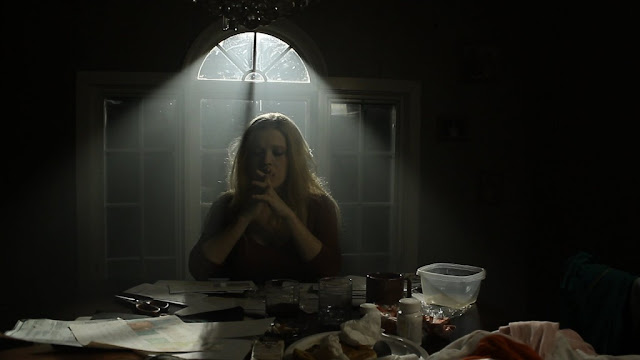 Yes, Crestfallen is about suicide (or rather about the process of it)—both mentally and physically, as it affects one woman, or anyone; that detail simply can’t be avoided.  Trying to keep it a secret is futile…and even pointless.  However, mentioning it doesn’t include a spoiler; the film is, I think, really about something more important—the vanity of life seen through the eyes of death.  Changes of heart are really the darnedest things, especially when they happen while the heart itself is dying.

No, I’m not going so far as to tell you that the woman (called Lo in the credits) lives or dies in the end.  I must leave something for you to discover (or decide for yourself) in this film I know you’ll watch.  Even though that seems an important detail (surely like the biggest spoiler of all), you’ll see for yourself that it really isn’t.   Again, I’ll refer to the process—rather than the product—that, in the end, seems most important.

Deneen Melody is a natural in her role as the woman silently telling her story.  Her angelic beauty conveys innocence, no matter what her thoughts reveal; sadness is felt, pure and untouched, from her soul, as if she really is the character she portrays.  Deneen’s captivates us, making us a part of her; the despair in her eyes is real and convincing, as if from experience.  While others may have played her role, others could not have played it better.  Deneen is comfortable and absorbed in her character, and her performance shows it; she portrays the poetry of Crestfallen with a style that makes it one to remember—and even one to watch again.   Deneen has previously starred in other short films—including Lewis and Blood Kin; she will also appear in an upcoming film titled Rose White (where Deneen is the writer, actress, and producer).   I look forward to seeing more from Deneen in the future; with her talent, she’s a star with the brightest of careers ahead!

The flow of Crestfallen is as smooth as running water; scenes glide from one to another with the streaming consciousness of thoughts and memories.  As I watched it, I felt swept along with the story and the music; the flow of events and rhythm kept me moving at the same pace, never compelling me to check the time or think of what I else I could be doing.  I really wanted to know what would happen next, from one scene to another, until the very end.

Crestfallen is a work of art without words; dialogue would only have brought it down to a more common level, making it like too many other stories of its kind.  It’s an example of how a tragic but ordinary story can become tragic and extraordinary.  Countless stories like Crestfallen are played out each day in life, but few are told so well as a work of art.

I would normally not talk as much about plot in a review, but Crestfallen is a film that must be analyzed as much as it is reviewed.  It’s a short film that is very concisely and fully about ideas and meanings that are literally in every frame of its running time.  Watching the story unfold for the first time—with all of its style and imagery—still leaves plenty to be seen, regardless of what you’ve read here or elsewhere.  In other words, I haven’t spoiled a thing!

Crestfallen was directed by Jeremiah Kipp.  He has directed numerous other short films including The Sadist, Easy Prey, Contact, The Pod, The Christmas Party, Snapshot, Drool, and The Apartment; he was also the assistant director of one of my personal favorites—I Sell the Dead.  Kipp, teamed with Dominick Sivilli as director of photography, creates a movie in a way that the mind thinks most creatively.  In Crestfallen, Kipp and Sivilli sweep the viewer along with poetic visuals, linking images and scenes that speak to our way of thinking and wondering, making even the surreal seem familiar.  The camera, under their direction, focuses on the ordinary, giving it extraordinary meaning; just the right lighting and angles on Lo’s instrument of suicide turn it into an object for thought and meaning beyond what it literally is.  Drops of blood spreading through water symbolize the movement of memories, blending with life…and death.  The turning and tilting of our perspective as Lo’s life drains away—along with familiar thoughts—helps us identify with even what seems beyond us.


Harry Manfredini is another who must be applauded here.  His score for Crestfallen is perfect for the mood of the film.  Along with the acting of Deneen Melody and the directing of Jeremiah Kipp, Manfredini’s musical score is the vital third part of the whole that makes it soar above the ordinary.  His music is haunting and foreboding, while, at the right time, ethereal, hopeful, and uplifting; it develops, with a life of its own, the poetry in the story, beyond the level of a simple narrative.   In a movie with no words, music is even more important, and Manfredini delivers exactly what’s needed.

Crestfallen is more than a movie; it’s a work of art in motion.  It’s definitely worth watching once, at least to understand the reasons to watch it more than once.  It’s like reading a good poem that you read often; it doesn’t take long, but it sure gives you lots to think about afterwards.  Put Crestfallen on your movie-watching list today!  It’s one of the best things you could do in 6 minutes!

Watch Crestfallen on the Space Jockey Reviews website at www.spacejockeyreviews.com.
VIEWER DISCRETION IS ADVISED!
Posted by Unknown at 8:27 PM