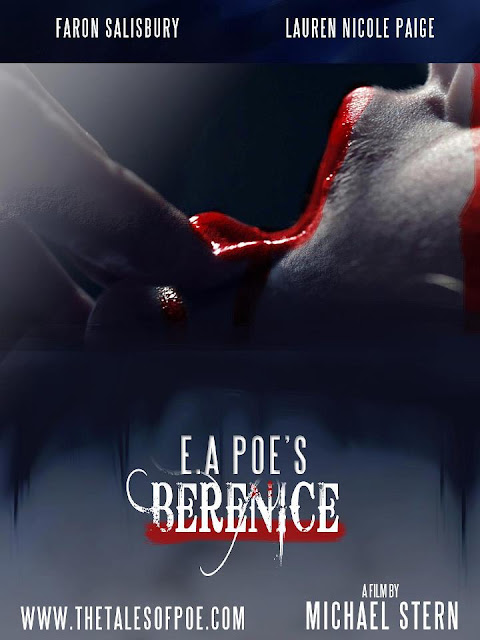 “The eyes were lifeless, and lustreless, and seemingly pupilless, and I shrank involuntarily from
their glassy stare to the contemplation of the thin and shrunken lips. They parted; and in a smile
of peculiar meaning, the teeth of the changed Berenice disclosed themselves slowly to my view.”
~ Edgar Allan Poe, Berenice

Fellow Poe fans out there, it’s time to break out the Champagne and party!  “Why?” you ask.  Well, there’s good reason.  A lesser-known tale of Poe has now been made as a short film–or as part of a series, I should say.  After watching the trailer, I am most excited about seeing the whole film.  “Which story is it?” you ask.  It’s “Berenice”, aptly called E.A. Poe’s Berenice.  It’s the first of three such Poe tales scheduled to make a trilogy; the other two in the works are “The Tell-Tale Heart” and “The Cask of Amontillaldo”.  Can this get much better?  I doubt it!

For those of you (if I can find any) who don’t know Poe’s “Berenice”, let me be the “stately bird of yore” who informs you, while “beguiling all my sad soul into smiling.”  (Well, my soul isn’t really sad, but it’ll do for the time, for rhyme.)  “Berenice” is, without a doubt, one of Poe’s most violent tales.  According to its written form (not necessarily from the film form, as I have not seen it), it’s about a man named Egaeus who is preparing to marry his cousin Berenice.  (Sound familiar?)  Egaeus falls into periods of intense focus, obsessive compulsive behavior, and depression, during which all he sees or seems “is but a dream within a dream.”  (I just had to throw it in.

)  Berenice begins to deteriorate from an unknown disease, with only her teeth remaining as the healthy parts of her body.  (What a terrible way to watch your loved one go!)

Even though I don’t know the exact course of the  film’s plot as compared to Poe’s, I should stop here for fear of revealing, or maybe stealing, the plot as it is, or as it’s not.  (Yes, I’m emulating a Poe-like rhyme “keeping time, time, in a sort of runic rhyme,” so bear with me.)  “A bit farther,” you say. Okay.  Egaeus begins to obsess over Berenice’s teeth, as the enduring image of his loved one.  (No, not her eye; that’s a different tale.)  One day, Egaeus wakes up from a period of “focus” with an uneasy feeling, and…and for fear of pulling the teeth right out of this future feature, I’m really stopping right here.  Yes, I’m really stopping, before I’m buried prematurely, walled up in a basement, or chopped into pieces and buried beneath the floorboards of an old house…by a man who’s fixated on my right eye, my teeth, and who knows what else!  Oh well, this could go on and on until I’ve “marveled this ungainly fowl to hear discourse so plainly.”  For now, this bird hath spoken–”this grim, ungainly, ghastly, gaunt and ominous bird of yore…Quoth the raven, “Nevermore.”‘

E.A. Poe’s Berenice was written by Iwan Benneyworth, directed by Michael Stern, and produced by Visitor One Entertainment (formerly Mabus Productions).  It stars the beautiful Lauren Nicole Paige as Berenice and Faron Salisbury as Egaeus .  Also featured are Stephanie Ann Whited as Berenice’s mother, Jessica Moss as Annie, Catherine Goodrich as Little Berenice, and Toby Wherry as Dr. Cartwright. From the trailer (which is all I have to go by at this point), the acting looks solid, the production values look high, and, if that’s not enough, it also looks to be following the storyline of the original Poe penned himself.  For starters, that’s the type of good news we like to hear about anything Poe!  Only “the bells, bells, bells” may ultimately tell! “What a world of merriment” the movie foretells!  From the looks of everything, all the “bells” and whistles look firmly in place for this production!

“Deep into the darkness peering, long I stood there, wondering, fearing Doubting, dreaming dreams no mortals ever dared to dream before.”  ~ Edgar Allan Poe–of course!  No, it’s not a line from “Berenice”, but, certainly it is in the spirit of those demented, delusional thoughts and dreams that inspire us, as it seems, as “a dream within a dream.”  Most certainly, it works just as well for Berenice.

Okay, enough of all the classic Poe quotes mixed in with my totally fresh and original writing!  (wink, wink

)  Go ahead and watch the trailer for E.A. Poe’s Berenice; it’s surely enough to keep your “Tell-Tale” hearts beating, without entreating. If you’re like me, you’ll want to see all of this episode, and the other two as well!  In the meantime (yes, here I go again), “Let me see, then, what thereat is, and this mystery explore…Quoth the raven, “Nevermore.”‘

E.A. Poe’s Berenice has already won an award for Best Drama at Cape Fear and Best Thriller at the LA iTV Fest.  Mabus Productions is also currently talking with TV networks about the possibility of doing a miniseries. Episodes will be available to watch on iTunes and the like soon.  Stay tuned for more information!

* Quoted excerpts above were borrowed from “The Raven”, “The Bells”, and, of course, Berenice–works by none other than the obvious master of the macabre and father of detective fiction, Edgar Allan Poe. Credit is hereby given where credit is due.