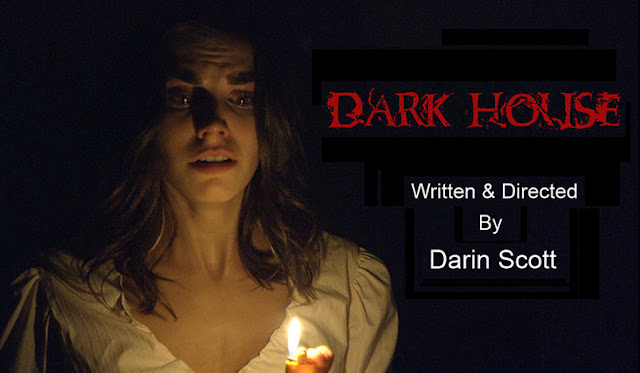 Dark House begins with three young girls riding bikes down a street that could be anywhere, towards a house you wouldn’t find anywhere.  The house is gaudy, Victorian, and more odd than scary, until we hear a scream from within!  Inside the house, one of the three girls—our future heroine Claire—finds over half a dozen butchered children.   She also sees the doer of the deed punishing herself in a bloodbath of bone-grinding, flesh-mincing, hard-to-watch...well, you get the idea.  But, since this is a horror movie, have we seen the last of her?  Probably not!

As for the butchered children, yes, you read that right!  Not every terror tale treads that tabooed road, but Dark House does it without a flinch.  Off camera as it is, it loses none of the shock it deserves.  If you are disturbed by such things, be forewarned ahead!  If you forget, the bloody toys in the opening credits should remind you.

In true horror movie form, we flash to Claire, 14 years later, still traumatized and messed up, with all manner of social dysfunction.  She’s seeing a psychiatrist with intentions to face her fears and thus rid herself of them, as the cliché always goes.  Will she go for it?  Of course!  How could we have a horror movie, if she didn’t?  It’s only the process that leaves room for originality.

As for the messed up Claire, it’s no wonder (only because it’s so common) that she looks so good being so messed up.  Heroines in horror films always look good, no matter what manner of hell they endure dodging death.  Meghan Ory (who plays the sassy, twenty-something Claire) is no exception to this tradition.  She’s candy for the eyes, no matter what—soaked in blood, panting with sweat, or wrapped in a straight jacket.  Meghan is a dark-haired, dark-eyed beauty who has trouble looking bad, no matter how bad things get.  Some horror heroines don’t have an excuse, but Meghan does! 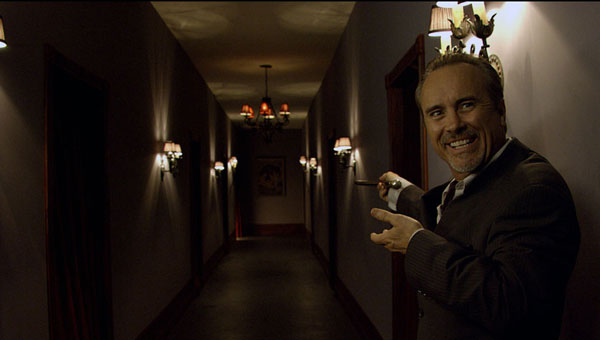 So far, Dark House could be any other horror flick that, although delivering the gore, does little to stand out.  However, with the appearance of Walston Rey (played by Jeffrey Combs), things begin to change.  A true over-the-top horror character, stereotyped in all his roles, Combs always does the act that steals the show.  In Dark House, Combs plays a modern-day P.T. Barnum of high-tech horror amusements.  He’s eager to reestablish his place as the best in the business, with the money-hungry mind of a capitalist for fuel.  Therein lies the subject of our movie.  Dark House (the scene of the child massacre) is to be the foremost innovation in horror fun parks, “where people can die a thousand times and truly live.”  Walston has created 36 of the most successful horror attractions in the country.  I only wish so many places existed!

Dark House makes original use of one of the most overused ingredients in modern horror cinema—computer generated animation.  Numerous cameras throughout the house produce holographic albeit true-to-life images of monsters, murderers, and maniacs galore.  Wait!  There’s more!  That computer-generated ax, knife, or mace doesn’t disappear, until it’s halfway through your head!  Since real actors represent the holographic images, CGI in Dark House is mostly as perfect as it gets by default, if not by design.  Yes, it’s hard to go wrong when the cgi effects are real people!  However, when effects don’t look so good, they have the excuse of really being CGI in a funhouse.  How clever! 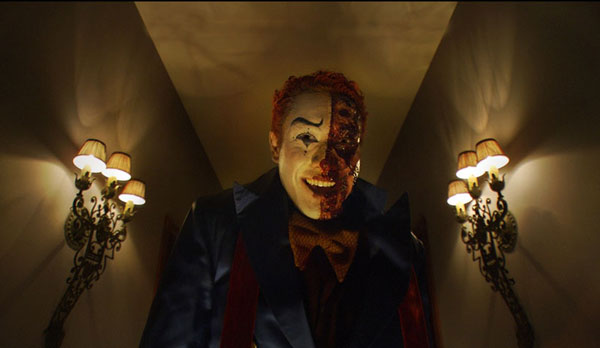 I’m not giving anything away to say that things go terribly wrong in Dark House.  Gigabytes of supernatural viruses infect spawns of cyber killers, causing flowcharts of movement to the depths of murder and mayhem.  No.  That’s not a quote from the back of the DVD case.  That’s just my cryptic way of spitting things out at the moment.  In other words, Dark House is, most simply and literally, technology gone to hell!

Speaking of murder and mayhem, it’s carried out by a most colorful coven of creatures.  There’s a Wraith (or she-ghost in need of a manicure) as scary as anything I’ve seen; there’s a killer clown scary enough as a killer clown, and a demented doctor who, let’s just say, didn’t take the hippocratic oath.  I could go on and on with these, but I’ll leave the rest for you to find yourself.  Be careful though, as these holographic horrors are set off by nothing more than fear. 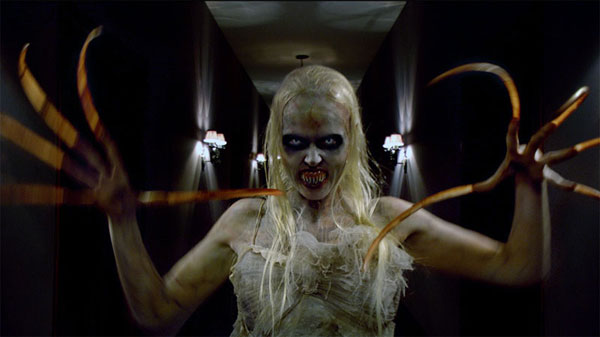 As for other characters of the human sort, there are more than a few.   Ariel (Bevin Prince) is the buxom blonde, Rudy (Matt Cohen) is the would-be main squeeze of Claire and Ariel, Lily (Shelly Cole) is the enlightened girl in black, Bruce (Ryan Melander) is the resident wiseass, and  Eldon (Danso Gordon) is the too-cool-headed-in-the-face-death guy who never lasts long.  There’s also Samantha (Meghan Maureen McDonough) as the libidinous lesbian, giving the camera repeated reasons to look at Ariel’s buxom body.  All of these actors do a fine job of playing their part, as typical as it may be.  There is no bad acting; it’s just type characters who act, in real life, as badly as they are portrayed here. 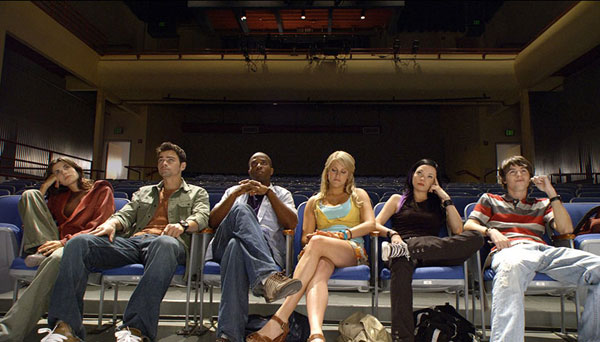 Last but not least is the performance of the religious demonsess/zealot from hell, Mrs. Darrode (played by Diane Salinger).  This woman is the perfect person for the wraithlike role she portrays.  She is as much like the monster, in character, as anybody (or anything) else could be.  She turns a creature that could come off as funny into something that is truly scary.

How does this colorful collection of characters come together in just one tale of terror?  Is it fate, design, or forces too strange to know?  No matter how many times you scare me with a hologram, I’m not about to tell you here!

By now, I know you’re asking about the gore.  “Does it deliver the goods?”  Yes!  Director Darin Scott, with Douglas Dye accompanying him as the writer, know what type of movie this is; they step to the plate, hitting a homerun in that area, if not the others.  The death scenes are in the classic grand guignol style, being as graphic and naturalistic as necessary.  Real actors, props, and old-fashioned effects are used alongside CGI images that are sometimes more or less too obvious.  Real fake blood sprays and squirts along with cyber blood from scene to scene.  However again, since effects really are CGI, as part of the story, Dark House excuses itself without embarrassment.

Overall, I really liked Dark House.  It was much better than I expected, based on what I often expect from such movies.  Jeffrey Combs played his Herbert West caricature as fan service for all; all other acting was good enough to do the job, if not better.  The colors were vibrant, the gore was plentiful, the death scenes were creative, and the action was nonstop, after wasting little time to start.  Dark House was also not long enough to overstay its welcome.  With a brisk running time of 85 minutes, it’s hard to find time for boredom.  If you’re a fan of horror films that know their niche and deliver the goods, visit Dark House tonight.  Just don’t forget the popcorn!