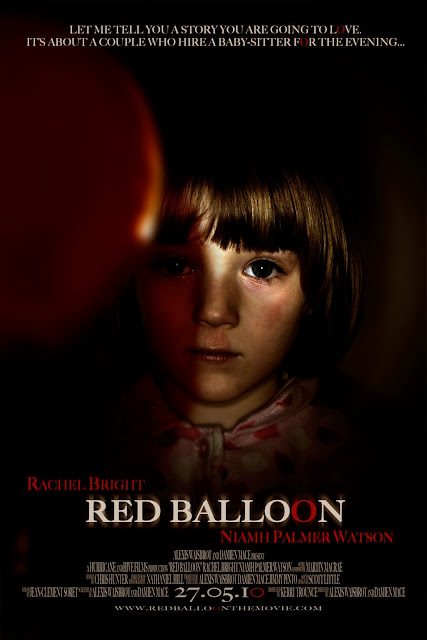 A voyeuristic journey into a house and through a hallway leads us closer to a female voice in the distance.  The voice, we see, is from a barefoot girl talking on the phone and painting her toes.  She’s happy, carefree, and relaxed, as if nothing but the next social event is on her mind.  We soon learn that she’s babysitting, being tempted to go elsewhere by a friend.  I know you’re already saying, “I’ve seen that before!”  Yes, I agree.  Vulnerable young babysitters are the clichéd, predictable victims of the best and worst of horror movies.  The body count for child-watching cuties ranks among the highest I know on the altar of horror cinema.

Yes.  Red Balloon could be like so many other horror movies we’ve seen too many times, but it’s not.  What makes it different, you say?  Believe it or not, for one, it’s that clichéd babysitter, or rather the girl who so perfectly plays her part.  Rachel Bright is the icon of a fresh-faced, home-alone teen, unaware of the horror-film hell ahead.  With acting talents beyond her years, she breathes life into an otherwise common character.  Rachel’s wide-eyed enthusiasm makes us interested in Julie, not caring that we already know her.  She is natural and authentic in her role, as if she is the terrified teen she portrays.

Besides Rachel’s great performance, she has another big ally in her arsenal.  No matter how many times I see a babysitting babe in for the gale force of terror, I never get enough!  Let’s face it.  The fear factor is based on vulnerability, and babysitters are on a short list of clichés that work.  There’s also a great way that Red Balloon keeps Julie from being the dumb girl who won’t leave when the door’s open.  Imagine that!

As for other clichés that work, we also have an evil child, an evil toy, and, yes, the obligatory “things that go bump in the night.”  That’s another terror-tale trio that, if done correctly, can work every time.  Evil children scare the $%*# out of me, no matter how many times I see them!  There’s something that violates nature when you see an innocent face capable of malevolent things.  Evil children in movies only need to look innocent while they’re doing evil things; Niamh Palmer Watson naturally does that very well, while looking adorable at the same time.  As for toys and noises in the night, that’s all I’m saying.  This trio of toys, children, and nocturnal noise works again in Red Balloon, as well as I’ve seen it work the first time elsewhere.  There’s a couple of others involving news and nightmares that I’ll leave unreported here.  It's as if the writers threw in "everything but the kitchen sink" to prove they could make something extraordinary out of the ordinary.

Where Red Balloon really rises above the rest is in the cinematography and the acting I’ve already applauded.  As for acting, there’s a very natural feel about the whole movie, with due credit for this again given to Rachel Bright.  The camera angles, lighting, and perspectives give Red Balloon a claustrophobic, voyeuristic feel—as if we’re seeing something we shouldn’t.  It also makes us feel uncomfortable, instead of just jabbing us with cheap thrill scares.  Directing and editing is tight and crisp, with scenes smoothly flowing from one chop to the next.  There are more than a few things Hollywood could learn from the directing of Damien Mace and Alexis Wajsbrot, the cinematography of Nat Hill, and the editing of Chris Hunter.  These are some talents to watch!  In one scene, the camera focuses on Rachel’s feet as she sits on a couch, suddenly zooming backwards, down the hall and out the window, until the viewer is in street outside.  This is all done in what appears to be a single take.  Excellent!  It’s one of those “How’d they do that?” moments!

Overall, Red Balloon is a great short film.  The story is predictable, but the actors aren’t.  We’ve all seen the terrified babysitter story, but we’ve never seen it done exactly like this before.  What’s better is that this story takes place in just under thirteen minutes!  It packs all the punch of many ninety-minute movies in a fraction of the time.  Red Balloon removes all the fat of most movies, dieting to a bare-bones appetizer if not an entrée.  Put Red Balloon on your movie-watching menu today!  Even if you don’t like the taste, it won’t last long.

To see Red Balloon in its thirteen-minute entirety, complete with all the thrills and chills reviewed above, click on the movie below.  Or, to view it in a larger format, visit the "Short Films" page on my website by clicking here!  (It's the first movie, at the top, and, yes, it's worth the time to click on it and go there instead!)  Enjoy!