RAY BRADBURY: A Lifetime of Wonder and Imagination

Space Jockey Reviews is sad to report (along the so many others) the passing of the science fiction legend, Ray Bradbury. The author of such classics as Fahrenheit 451, The Martian Chronicles, The Illustrated Man, Dandelion Wine, and Something Wicked This Way Comes died this morning in Los Angeles, at the age of 91.  With his influence on science fiction, he has surely left the world a better place than it would have been without him; but now, without him, today, the world shines less brightly than before.  To all of those who loved him and his work, yes, there surely is a difference to be felt.

It will, of course, be impossible for anyone to fill the void of his absence.  His impact on science fiction literature and films has been (and will continue to be) immeasurable.  However, Mr. Bradbury, I'm sure, would have the greatest confidence in the imagination in us all fueling the stars of creativity to infinity--and yes, even to some magical, yet-unknown place beyond.  So, in the spirit of his life, his work, and his undoubted hopes and dreams for us all, we should remember him, while looking to the future.  He has shown us the potential of the human mind, and what, still yet, is on the forefront for us all to discover.  To dream, think, and create, he proved, is to know no limits.  Ray’s legend will live forever; so, in a way, he hasn’t left us at all.

Bradbury is survived by his four daughters, Susan Nixon, Ramona Ostergren, Bettina Karapetian, and Alexandra Bradbury, and eight grandchildren.  His wife, Marguerite, predeceased him in 2003, after fifty-seven years of marriage.

Ray Bradbury receives a ten-rocket salute here at Space Jockey reviews for all he has added to the world, as well as all his influence will continue to add.  He will be greatly missed, but never forgotten. 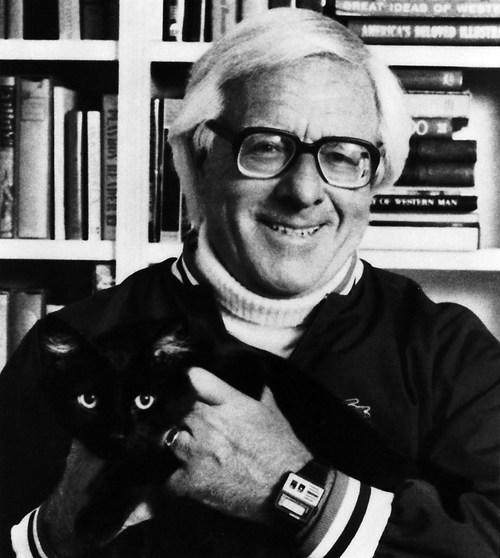