JENNY KRUEGER'S MEMOIRS OF A SCREAM QUEEN--Where Chris Rennirt is the 150th Follower!

Yes, you read that right!  Chris Rennirt (that's me--the one and only Space Jockey Reviewer) became the lucky (or fateful) 150th follower on Memoirs of a Scream Queen--the superstellar website posted and hosted by none other than Jenny Krueger, THE Scream Queen herself!  What chance or forces of fate in the cosmos were steering my fingers as I clicked on that "Join this site" button at that moment in time, I cannot know--but that it happened is surely a fact.  More fortuitous things have surely come to pass in the cosmos, but surely none so well appreciated by me.  Why?  It set in motion a cause/effect relationship that made me the subject of a feature post!  So, to start things off, a great big Space Jockey thanks goes out to Jenny Krueger!  Thanks a bunch, Jenny!  It is greatly appreciated!

Now, rather than go on about myself, I'll tell you more about the whole lot there is to know and appreciate about Jenny Krueger--another gorgeous girl of gore!  Yes, you might ask how an article that seems to be about Chris Rennirt can actually be about Jenny Krueger.  Rather than even trying to answer, I'll just defer to Jenny's own words: "It's better to be random and shocking than 'normal.'"  Random, I will surely be.  Shocking?  Not yet anyway.

"People ask me why I consume my life with all things horror, It's fun. You see some people sew others golf. Me, I like to see people's insides on their outside." ~ Jenny Krueger

One major thing I like about Jenny is that she's up front and honest about her movie reviews from the start--and I really like that about a scream queen reviewer of cinema.  She makes no bones about what she does (no pun intendeed).  Here's the warning on her website, with every honest word intact:

"All of my movie reviews contain spoilers and will give away the ending of the movie. If you don't want the movie to be spoiled then I suggest you watch it before you read my review(s). Read at your own risk." ~ Jenny Krueger

Now, that's what I call honesty you can trust as far as the Space Jockey Rockey can travel--and that's really far!  Trust me though!  With or without spoilers, you will want to read Jenny's movie reviews.  They're just that good!  That's coming from one already-addicted reader (and writer) of movie reviews myself.

"I always tell people if you're not out shocking people then you're just plain boring." ~ Jenny Krueger

At last view, Jenny has 97,431 pageviews, and yes, 150 devout followers!  WOW!  What a well-deserved following of scream queen loving fans she has, with many more in the very near future, for sure!  Below, a gothic Jenny shows us what a real scream queen can do with a lovely face!  That's a face that horror lovers, aliens, and general audiences alike can easily love!  Regardless of the horror, the beauty cannot be hidden! 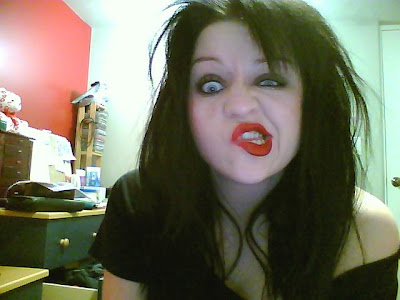 Here's more interstellar info about Jenny, straight from her profile!  Good stuff here; check it out!

At Elm Street and Camp Crystal Lake, it looks like Jenny is neighbors with none other than Freddy Krueger and Jason Voorhees!  What luck!  I'd say they're neighbors only a scream queen could have.

Also, check out Jenny's self-portrait in photos--Things That Define JK (Jenny Krueger)--by clicking here! It's a lot of fun! Plus, you'll easily get to know Jenny a lot better at a glance!  At least a few photos require a bit of explaining, and Jenny does a screaming fine job of doing it.


"The Zombie Apocalypse is among us. You've been warned." ~ Jenny Krueger


Here's one final fact as interesting and unique as Jenny herself.  Whereas many bloggers avoid spam like the plague and pay large amounts of ransom to avoid it, Jenny openly invites it.  Yes, you read that right; she invites it, no doubt with a smile (or a scream) as well.  "Spam Me!!!" Jenny says.  Any questions, comments or concerns, please email me at misskrueger666@hotmail.com"  So, go ahead and send Jenny those questions, comments, or, in the unlikely event, even concerns.  I'm sure she'll be screaming happy to get them!