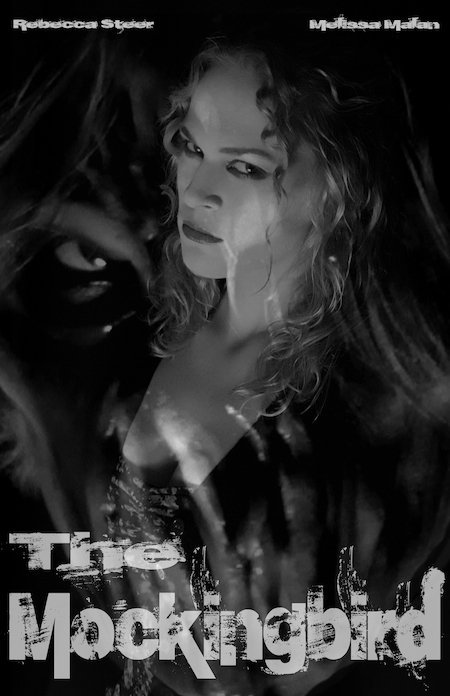 If you suddenly needed to care, selflessly, for another—a family member, or perhaps even a sibling who had once cared for you—giving up most of your life in the process, could you do it? Could you return, repay, or at least, “mock” the kindness given to you? Before you say yes, stop and think. Do you really know yourself so well? Are there, perhaps, demons hidden within yourself you’ve only yet to meet? The Mockingbird is a short film by Rick Gawel that makes us consider, in a not so comfortable way, the most extreme albeit possible outcomes of such a need.

On second thought, “not so comfortable” is actually far too mild to describe the way The Mockingbird goes about confronting us with such possibilities. Horrific is actually more appropriate. “How?” you ask. Let’s begin with the beginning. A woman moves down a hallway, half awake, on her back, with overhead lights flashing by; an oxygen mask on her face, suggests she’s headed for emergency treatment somewhere, surely in a hospital. But, no! She’s being dragged by her feet! Where she’s being dragged and what’s about to happen are things I’m not about to tell. Let’s just say that it makes the unpleasantness above only child’s play. Madelyn Kennedy (Rebecca Steer) is a twenty-something woman suddenly confronted with the need to care for her sister, Evelyn (Melissa Malan). Evelyn is a once strong and independent woman robbed of her autonomy by an accident—one leaving her paralyzed from the neck down, condemned to a life of helplessness, confined to a bed. Evelyn is a prisoner in her own body, while Madelyn becomes a prisoner in her own home, haunted by commitment, guilt, and desperation.

What is most interesting about The Mockingbird is the in-your-face confrontation with transformation—deterioration into madness and the worst of what is human. With this change comes questions that involve us all; as viewers, we become as much a part of the story as Madelyn and Evelyn. Is the change the result of one susceptible individual becoming what few of us could? Or, are we too arrogant and vain to see the truth? Is it, instead, the result of forces grating on the senses to the point that any of us could become a monster? Is it, in fact, the rearing of an ugly nastiness, latent in us all, ready to spring forth and make us behave just as badly, beyond our control? Yes, what made me feel even more horrified was the thought of not really knowing myself—in the sense that inexperience makes it impossible. Setting aside what you think you know, and all of your most hopeful expectations, do you really know yourself? The Mockingbird makes us ask all these questions and more.

Rebecca Steer is an actress I have not seen before, but she plays her part as Madelyn with all the force necessary to give the movie its punch. Rebecca transforms her character from a pleasant, likeable woman, submissive, but otherwise “normal” on the surface. As the movie progresses, Steer shows her true talent by progressing her character accordingly, with impressive realism. Oddly, she makes Madelyn’s changes believable as much as they are bizarre and disturbing.

Before you think the part of a paralyzed woman cannot be difficult to play, think again. Melissa Malan has the challenging job of making Evelyn afraid, not with movement of the body, but only through looks on her face and terror in her eyes. Malan did this well enough to make me afraid just watching her; she made me feel as though I was, like her, unable to move, unable to defend myself, unable to do anything but be afraid. Without such a powerful performance as a bedridden character, The Mockingbird could not have been the success it is. Evelyn’s fear is a key part of The Mockingbird’s horror; Malan’s ability to communicate it to the viewer is what makes it real. 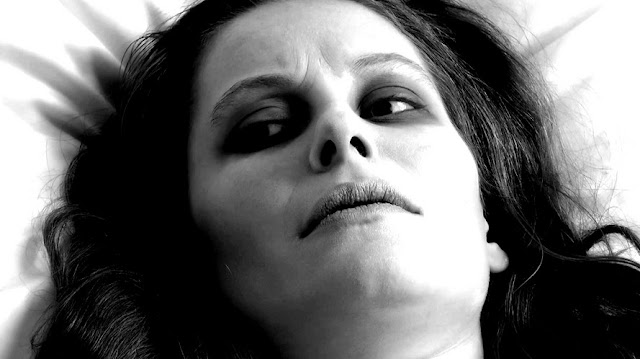 Director and editor Rick Gawel, along with cinematographers Tony Colon (and yes, Rick Gawel again), have created a horror film that stretches the boundaries of surreal cinema. As a reviewer, I must confess being partial to this type of film; however, with any objective view, The Mockingbird is a film that sets itself apart from others I’ve seen, visually as well as conceptually. Stark black and white, with strong highlights and high contrast, along with quivering overlapping images, gives the movie its surreal and most unique effect. Image shifts throughout intrude on the senses, unwelcome but imminent, forcing us, like Madelyn, to face the reality of human deterioration—physically as well as mentally. Bizarre camera angles make even reality seem unreal at times, helping to keep us unsure about objectivity, even when we assume it to be the case. With all the effects that Gawel and Colon deliver, the whole movie could be a nightmare…or so we think. Making us think again, however, we sense somehow that it’s not.

Added to these horrific visuals is a soundtrack that nearly drove me nuts—or should I say, as mad as the man in “The Telltale Heart.” Yes, I definitely should. A slow, pulsing repetition of noise (not music), grating on the nerves, making me want to turn it off. Before you think it’s a bad thing, think again. Like it or not, it’s a good thing here. This is a horror movie! Horrific, uncomfortable sound is delivered here with annoying perfection. I wanted it to stop, but it wouldn’t; I wanted to mute it, but I wouldn’t do that either, even though I could. Instead, I gave the movie every opportunity to make me uncomfortable; fitting with the story, it did that very well—as easily as a rope chokes a throat, a knife cuts the flesh, or any other thing causes pain, such as it does in The Mockingbird.

With the amount of special effects in The Mockingbird, no review could be complete without applauding Jenni Schenk—the one in charge of makeup and special effects. Blood and gore effects are not only copious, but just as copiously well done. Black and white, while toning it down, doesn’t allow for skipping quality…and Schenk doesn’t skip. With lesser talent, The Mockingbird might never have flown.

Never fear! There’s a lot more in The Mockingbird to fluff your feathers. There are nurses who draw blood—lots of it—and don’t wear shoes. Yes, they don’t wear shoes! Why? Who knows, but it’s another of the nightmarish details I like. Just like a dream, it just is. When it would make more sense for them to wear shoes, they don’t. There’s also a being with no name, possibly more important than we know. I can only guess who he might be. Do the same yourself, and see what you think. And, there are…well, lots of other things I won’t talk about here. Just watch the movie! 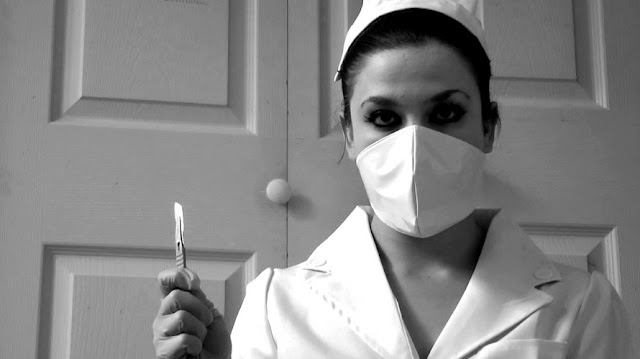 Oh! “What is the significance of The Mockingbird, as a title?” “What does it mean?” you ask? I’ll only say enough to be cryptic until you’ve see the movie. It is, I think, about punishment—how penance, in its most devastating yet effective way, is like a Mockingbird in its ability to imitate. The presence of such connections is another quality that makes The Mockingbird soar above the ordinary horror flick. There are metaphors to be found; rather than being disproved, they are talked about, living beyond the movie’s screen time, becoming something much greater.

The Mockingbird premiered at the Viaduct Theater in Chicago on August 6, 2011, as a part of the very first Herbivore Productions film fest—Herbi-Palooza 2011. It’s a 41-minute short film that packs all the punch of a full-length feature; it’s also the third film in Gawel's "Tortured Girl" trilogy. This is the first of these films I’ve seen, but, from the force of this one alone, I’ll be seeking out the others. The Mockingbird has style, scares, and suspense to spare, with surrealism that truly transcends reality—a Space Jockey favorite, easily!

With only one of Rick Gawel’s movies watched, I am already a fan of his work, looking forward to what else he produces. Herbivore Productions has found a unique niche in horror cinema; ironically, it’s at the top of the food chain in its niche, with not another plant eater larger than itself. At the heart of this herbivore is the human condition, haunting us with all its darkest possibilities. Is there a Madelyn lurking somewhere in us all? A possible horror for any of us of us is all the more horrific for all of us. With The Mockingbird, Gawel and Colon remind us of that, from beginning to end…from each bloody nightmare to every bloodier reality.


A Scene from The Mockingbird


Below is a great interview with actress Rebecca Steer who plays the part of Madelyn Kennedy. True to her character's condition, Rebecca is paralyzed and bedridden, complete with her oxygen mask. If you're not interested yet, check out the subtitled interview question! Enjoy! :)