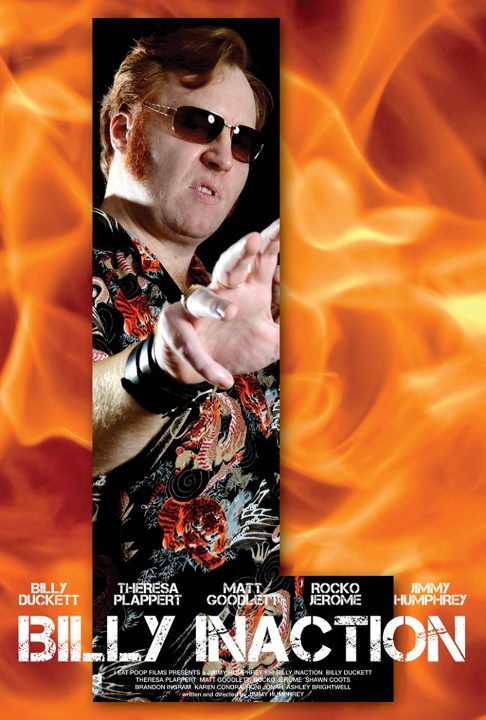 Okay, here it is–the long-awaited interview with actor Rocko Jerome! Rocko stars in the latest action comedy Billy Inaction, where he plays…you guessed it…himself. In this exclusive interview, he tells us everything we’ve always wanted to know about the “Mojo Dojo” that makes the man we know as Rocko Jerome!

1) How did you get into acting?


Well, doctor, it all started when I was just a boy…. I think anyone who acts or does whatever the hell it is my friends and I do, it comes as a result of never wanting to let go of “Let’s Pretend.” I was a master of Let’s Pretend from the time I could talk; I was always the hero of some story I was composing in my head. I was never just some red-headed kid sitting by myself out in the country, where I grew up. I was Han Solo or something, whatever the last thing I saw that blew my mind I was a version of that which was sort of puzzling to people, the lengths I would go to. My cousin told my aunt once, “I think he really believes he’s Spider-man.” I only heard that recently; it made me laugh. I’ve been method acting since preschool.

2) Who are some of your influences or role models?


The point at which it all started to come together was when I saw Evil Dead 2. I was probably 14, and dangerously close to the end of acceptable Let’s Pretend age, if not already well past it. Here was this very homemade movie with actors nobody I knew at the time had ever heard of, basically clowning around but making something very clever and entertaining. Before Bruce Campbell, a movie actor was Harrison Ford or whatever tiny percentage of people that we think of as “movie stars.” People I could never be, you have to seriously luck out. But with Evil Dead 2, they didn’t get anybody’s permission, they just made the damn thing and put it out there, and didn’t have to give up on acting out fantasies. They just got better at it.


Once I got in High School, I was very into the idea of becoming an “actor.” That would lead to a lot of heavy conversations with my parents and other adults who would say, “You can’t be an actor because you can’t make money at it, you’re living in a fantasy, get your act together and think about a career” because, again, people have that idea that an actor is Harrison Ford, and that anything that’s not paying bills isn’t worth doing. What I didn’t get yet was that you don’t “become” an actor. You are or you are not, it chooses you. You can be an actor and work at a gas station from birth to death, never step on a stage or in front of a camera, and you could be an actor in the only theater that really matters–the theater of life.


Anyway, the drama teacher at my school was a guy named Phil Hoagland. He was just a kid himself, really. I think he was 24. I wanted to be a James Dean kind of a guy, he wanted me to really come out of that and take my chi someplace for real. Which I guess I did, in my own backwards teenaged way. I played middle-aged business men and old perverts, stuff like that. Never a lead, but the character actor roles, the ones that actually made or broke shows by either stealing them or letting them get monotonous. I might’ve dropped out or got kicked out of school if not for the stabilizing influence of that program. Every time (well, most of the time) before I would do something stupid that would get me in trouble, I’d say, “I’ll get kicked out of the play if I get caught doing this.” That usually worked.

After a few years of doing those little plays, I got pretty good–for a kid in a High School play. You can be King Pencil of your High School, but going out for a real audition and facing that chorus line type scenario, my ego wasn’t ready for that. Hoagland said I rewrote every play I was in, and he was right, I did. I wasn’t ready–or ever will be–to be subservient to a director and be someone’s puppet. It’s great people can do that, I admire that, I’m just not that person, so my fancy flew elsewhere.

I ended up fronting a Rock & Roll band for a couple years. That really got me a lot of kicks, and I never had to go through that “I hope you like me, give me a job” act. It was more “You booked me and gave me this job, now you have to deal with this.”


I didn’t act again until I sort of got drafted into one of those 48 Hour movie things a few years ago and got hooked. I did a few of those; they were a complete terror each time out, trying to collaborate with people that had their own “artistic visions.” People are crazy, you know. I’ll just say that if you’re working with me and our feet are pointing the same direction, we could make something lovely and will definitely have a great time. If you want to manipulate me or thwart what I’m trying to do, you won’t have fun. But we might still make something good anyway! But I’ve got no time for that anymore.


I fell in with Jimmy’s menagerie not long after that. I like to play a sort of more cartoonishly oafish version of myself in these things, which is mainly a reaction to how many “filmmakers” like to make movies about how cool and virtuous they are, or how tough and ready they are, and women swoon all over them. I think that’s just about the worst thing you can do. So the movie version of Rocko Jerome is ultimately a parody of that kind of approach, where nobody but me thinks I’m anything at all like I think I am, because I’m just completely devoid of any sense of self awareness and have this huge ego with not a single shred of validity.


I did one time not play that guy, because Shawn Coots dared me to. Without telling anyone until we shot, I became the opposite character for this short. I’m proud of what I made that day, but I hated that guy I became. I basically took everything I hate and embodied it for the amusement of others. I proved I could so I would never have to again.


Ironically that's probably the best thing I ever did.

Just really to have fun and make my friends laugh, and make more friends of like minds, and keep trying to make something that's really good. Not just "Oh, that was good considering..." but actually something sharp and clever. Each thing I'm in is better than the last thing, I'll say that much.

It's been a blast. It really has. Whenever we sneak into someplace to shoot something there's this thrill of "we're really doing this, this is happening" and nobody gets that more than Jimmy. We're all co-conspirators in Jimmy's Circus.

It's funny, he's been working on this damn thing for years, and I still don't really know how the pieces fit together. His direction to me is always very vague. That's not a knock at all; I love that he trusts me to do that. But on this it was "You're a mob boss, ninjas work for you, you want Gustav dead, GO." I had no idea what any of that was! "What's my motivation?!?" So all the stuff with the Mojo Dojo and doing all that Elvis Karate stuff, I just did that to fill this big hole. Jimmy just let me do that. That's a very amazing thing to be granted. Jimmy has never told me "no."


I respect the hell out of him. His fate will be the same as mine. I hope this thing catches big time and people get into it. But if I just get to hear my friends laugh--that would be enough.


Check out Rocko's awesome website! Front on This: Salisbury Snake