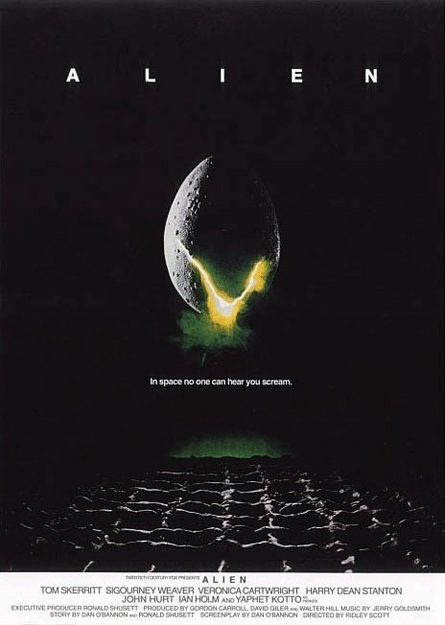 If you’re one of the few who’s never seen Alien, read no more than this paragraph. I wouldn’t want to spoil a classic waiting to be seen. However, if you have seen it, you may be interested in my take on a movie that affected me like no other. I suppose you could call this my attempt to explain the movie’s impact and influence, as a most outstanding example of truly iconic cinema.

To me, knowing where you were the first time you saw Alien is much like knowing where you were on the day of any other very important event.  It’s something I know I’ll never forget.  I was sitting in the theater, in awe, expecting more of the fascinating teasers I’d seen only in the made-for-TV trailers.  I was wondering, as I had been earlier, just how the egg in the poster, with a crack from which came green light and smoke, would somehow be part of the story.  Little did I know then that I was about to experience, emerging from that egg, a history making event in science fiction.  Little did I know then that I would, 33 years later, be writing an analysis of the movie’s impact.  Little did I know then how a 13-year-old’s imagination and life would be changed forever.

There are few things that evoke as much fear as total isolation in a dangerous environment, where the threat of death lurks everywhere, around every corner, and at every turn. “In space, no one can hear you scream,” was the phrase that highlighted the first Alien movie posters back in 1979. That phrase, although I did not know at first, was the essence of the movie itself—in space, alone, facing death, unheard by anyone or anything (that is anything we know). Such themes, although done before, had never been done so perfectly in science fiction. Never before had a movie combined such ultimate fear and danger, not on earth, not in our solar system, or anyplace familiar by any stretch. Never had anything been quite so truly “alien.” Yes, others had attempted, but none had succeeded.

Speaking of dangerous, alien environments, LV426 was, indeed, the most dangerous and alien of places I had ever seen.  With its windswept, bone-dry environment (literally littered with Giger's bio-mechanical bones), it was the worst of settings in which any one (or any group) of unprepared people could be trapped.  Yes, as the crew of the Nostromo explore the alien planet, looking so small and vulnerable as they do, I too feel just as much in danger, as an observer--whether in a theater with many others, or at home on my couch alone.  The dreadful effect is always the same, and surely just as powerful with each and every viewing.  For me, the impact is never weakened. 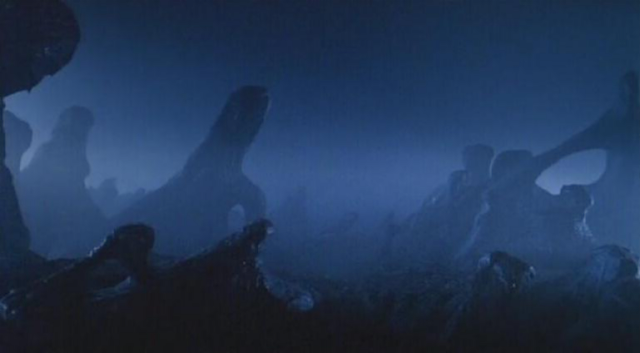 Making it all the more unique was a creature, also unlike anything before--a surreal bio-mechanical predator, fusing near-invincible organic and mechanical elements into one efficient design.  As Ash said himself, “I admire its purity.  A survivor…unclouded by conscience, remorse, or delusions of morality.”  Yes, this was a creature not only lacking a conscience, but also lacking even eyes to see the carnage it inflicted, if ever it even had a reason to care.  Topping it all off was an organism with molecular acid for blood, gaining revenge on its foe if injured or, even less likely...if killed!  Yes, this alien was, like its environment, truly new among everything else.  Alien was, and still is, 33 years later, the ultimate killing machine—a new classic, taking the stage with any of the most famous monsters before it.  A monster with the generic name "Alien" was the most unique and original yet.

Beyond its bio-mechanical body, molecular-acid blood and surreal style, what else made the Alien so much more than monsters before?  To begin with, let's consider its sexual design (with a phallic head), grotesque but oddly beautiful, oddly sensual, highlighting the horror even more.  Let's consider those inner jaws, dripping with saliva, springing forth in a moment, ripping a man's heart from his chest before he knows it's gone.   (No, I don't think I'd ever seen a monster do that that before.)  Let's consider the Alien in it's embryonic form--how, in this way, it does more than simply eat its prey.  As if being eaten isn't enough, the Alien violates your body utterly, bursting through bone, blood, and organs, in its moment of birth, amidst your writhing, screaming body--without even the sense of knowing.  It leaves the body of its host wasted, mutilated, quivering, and finally dead (not soon enough), without even the purpose of eating it.  Finally, let's consider all of this horror being done with much intelligence and no conscience, making it all the more dangerous, chilling, and yes...different. 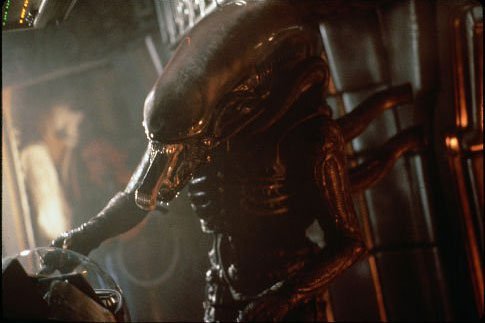 As for the story, we all know it. A crew of seven on the commercial mining ship Nostromo is awakened early from sleep to respond to a beacon, possibly signaling distress (or possibly a warning). After learning that they must investigate in order to be paid, they are forced to land on the “alien” planet. Once there, the isolation and fear grows, as they find the hostile, dead planet, and a derelict alien ship as the source of the beacon. Inside the alien ship is an ancient, fossilized pilot, killed by something bursting from its chest long ago. Bizarre, egg-shaped structures are also found in what appears to be a cargo bay.  Are they, perhaps, bio-mechanical weapons, meant to be dropped on alien worlds?  Oh, and who is the alien pilot (aka The Space Jockey), and how did he get there?  Only PROMETHEUS may answer those questions. 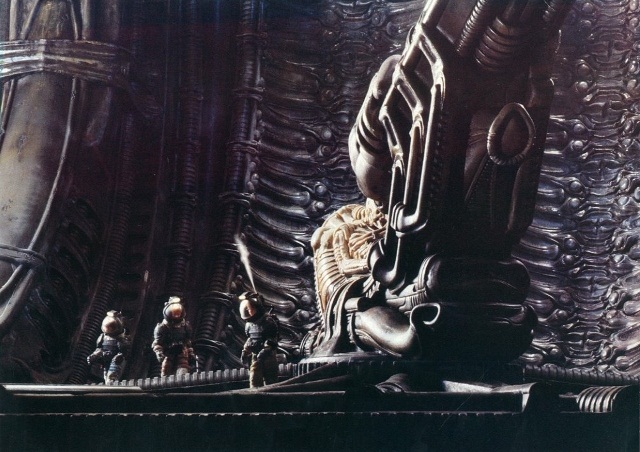 Next is the encounter with another of the most famous monsters in movie history—the facehugger! I remember well the tension I felt, gripping my seat, as Caine leaned forward, just before the creature burst from its egg. Dreadfully, I felt I was there with Caine, sharing in his fate. There are few moments in my movie-watching past that come close to rivaling that. Here, Alien did what all good movies should do; it made me feel like I was there. Yes, “being there” is what Alien consistently allows me to do. 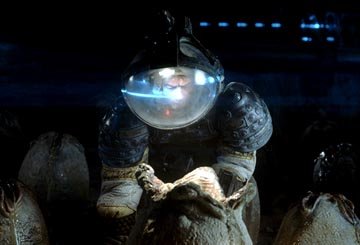 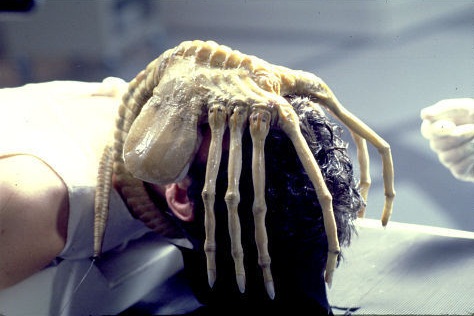 Ah, yes! Now, we come to the famous, if not legendary, chestburster scene.  (Yes, I'm going to talk about that again!)  Watching interviews with the cast, I learned that Ridley Scott had not told the actors exactly what was going to happen, before the infant alien emerged. As a result, looks of terror and shock on the faces of the actors were as genuine and real as anything expressed by those in the theater seats of the day. This was effective not just because the actors were unaware, but also, more importantly, because the effects were just so darned good! No computer generated anything! Imagine that! Everything you saw on screen was exactly what was really there for the actors as well as yourself. Again, you could participate in the experiences of the crew, as if you were there too, with them, having the same fateful dinner. I remember that feeling then. Each time I watch the movie again, I am now, as I was then, shocked—if not by surprise, by the awe and perfection of the moment. 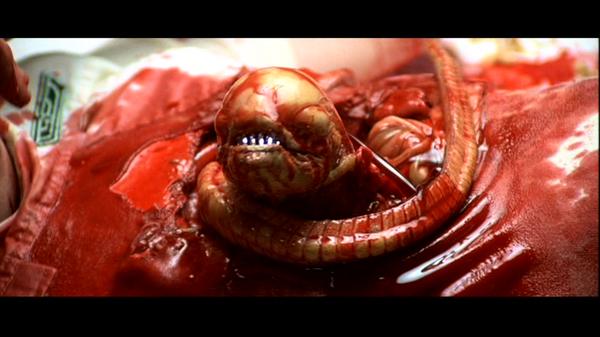 As the alien moves through the ship’s airshafts, the crew is killed off, and the isolation and danger grows. Even though we don’t see it, we know the Alien is closer, somewhere, making the danger all the greater, in our minds, as much as in the story itself.

The alien, finally in the confines of the escape pod, is the ultimate in claustrophobic encounters with raw danger and death. Who could not identify with Ripley as she slips quietly into her space suit, planning to rid herself of the creature?  Who could not experience her vulnerability, the way it empowers her even more to survive?  Even today, this is one of the most nail-biting movie moments I know. 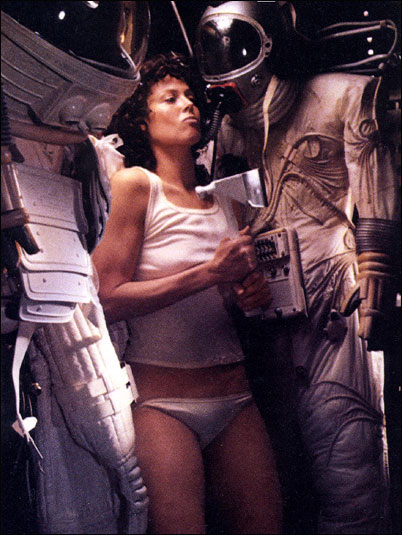 Who can then forget the haunting peace and silence of space, in the end, as it destroys the danger, envelopes the chaos, swallows it up, leaving us in awe of the experience. No one can hear us scream, but, finally there is nothing to scream about. Isolation has returned, but this time, it is also alone. 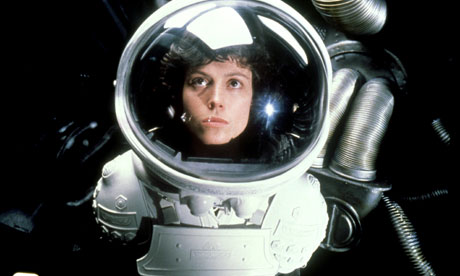 Speaking of isolation and aloneness, could anything other than Jerry Goldsmith's soundtrack be any better for this movie? From me is a resounding NO. The lilting, slowly rising score, ending in a crescendo of volume and magnificence, is an excellent complement to everything that is the essence of Alien. Like the movie, the isolation, in its nothingness becomes overwhelming in its presence, either as a danger or as a savior.

Of course, no analysis of Alien could be complete without paying homage to arguably the first true, tough as nails, butt-kicking heroine in all of sci-fi history—Ellen Ripley! Here was a woman, unlike any I'd seen on screen, dishing out the best of what she had to kick the ultimate in extraterrestrial tail. Her performance and strength of character rivals the best of anything I’ve seen since. My hat is off to Sigourney Weaver for helping make Alien every bit of the landmark achievement it is.

No. I’m not saying that none of these things had ever been done in cinema before. I’m only saying that never before had so many perfect things been brought together in a single film, particularly in the often less-respected genre of science fiction. If there is such a movie that had done this, I’ve yet to see it.

I could go on with this, summarizing more of the story we already know, pointing out exceptional things we’ve already seen and applauded. If it took any longer to prove my point, I’d take the time. However, even now, already, the reasons for the uniqueness, influence, and effects of Alien are obvious. The story, the monster, the heroine, the total movie experience were all beyond anything done before. They were, perhaps, to use a fitting hyperbole, as far beyond anything before, as the Nostromo and its crew was beyond us.