Imagine what you would do if someone offered to resurrect a loved one from the dead, even for a few days, to wrap up loose ends, and say goodbye one last time.  I know you’re thinking, “Of course, that’s ridiculous!” or something very similar.  However, let’s take the scenario a bit further.  Suppose the setting in which this proposal was offered was very strange and surreal, but real for sure.  Let’s assume that the circumstances, in their strangeness, made the impossible somehow seem possible.  Let’s assume that these things also occurred while you were desperate and vulnerable, willing to believe anything hopeful, even for a moment.

Wake Wood opens with flashbacks from the life of a couple, Louise (Eva Birthistle) and Patrick (Aidan Gillen), who have lost a child in a tragic accident not long enough ago.  They are fleeing their past, as it seems, looking for a better future, or both. We don’t know for sure at this point.  We only know that their lives are haunted, troubled, and desperate.  We see their memories enough to know. 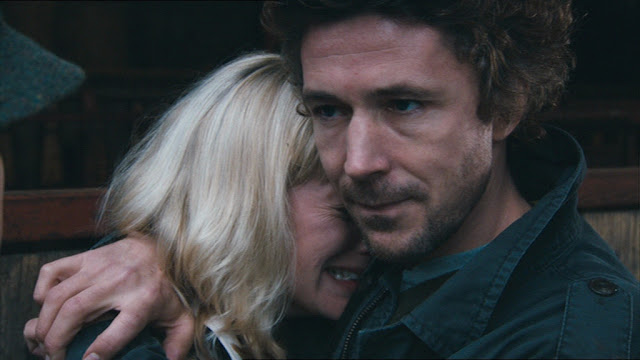 Now, the desperate, vulnerable couple looking for hope, arrives at Wake Wood—a quant, idyllic countryside community, evoking the opposite of what we feel from Louise and Patrick.  Memories of their child’s violent death clash with picturesque, green fields and rolling countryside.  There is an ancient feel about Wake Wood, as if it’s always been there, tucked away, waiting for us all.

Just as we begin to feel comfortable, we are reminded that this is a horror movie.  Wake Wood is not your typical English hamlet.  People there don’t act normal, they don’t say normal things, and they don’t believe what normal people believe.  In Wake Wood, we find that the abnormal is the norm.  People dressed in black emerge, as if from nowhere, banging sticks together, and saying things they shouldn’t know.  People warn you of things that shouldn’t be possible and offer you things not possible to give.  All the while, in Wake Wood, there is an odd, slowly convincing reality and reason for all that is unreal.  Slowly and disturbingly, things begin to make sense. 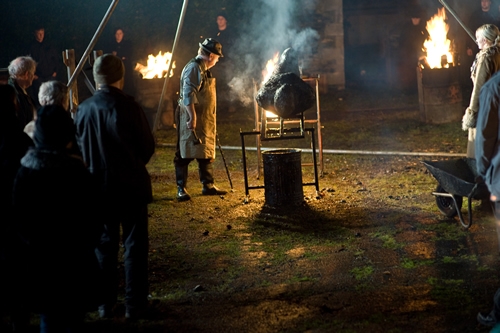 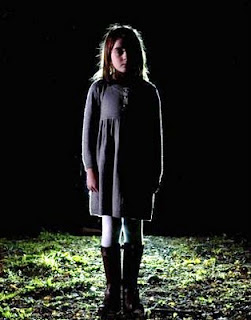 There’s something especially scary about evil children.  I’m not sure what it is, but it’s likely something to do with the contrast in the purity of the two things mixed together.  Evil mixed with the picture of innocence creates a dangerous façade, tempting us all too often to trust it, despite our better judgment, despite what we know otherwise.  In other words, an evil child is the ultimate trap.  is just such a trap.  She is, in many ways, the ultimate monster.  Even the whole village chanting, “Go back to the trees and lie among the roots,” won’t be enough to send back where she belongs.

Wake Wood is surprisingly gory.  Although I’ve never seen such things in real life, this is a movie that makes me feel like I have.  The camera lingers on the victims, after the coup de grace, showing the face of pain as well as death itself.  Here, we get as much blood and butchery a we’d get in most slasher films. When one victim’s heart is removed, no details are left to the imagination.  In the end, we see the organ in hand—and yes, it really looks like a heart!

The acting of all in Wake Wood is solid and realistic throughout.  Everyone is very convincing, doing a great job of selling, for 90 minutes, an otherwise unbelievable story.  I always say that actors in horror films have the extra job of making the unbelievable at least not laughable, as it might otherwise be.  Eva Birthistle and Aidan Gillen do a more than realistic job of portraying the troubled couple, Louise and Patrick.  Timothy Spall, a seasoned English actor I’m sure you’ve seen before, does a most professional job of playing Arthur, the village elder (or chief administrator of the Rite of Return, as I’ll call him).  He gives the character a certain believability that could be lost with someone less talented. 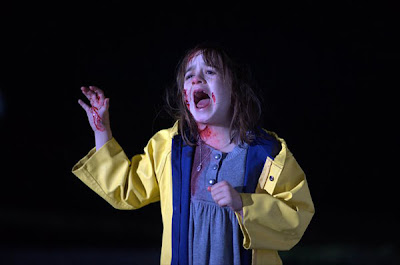 Ella Connelly does a stellar job in the nefarious role of Alice, the little girl gone too soon. Child actors who do well are always more amazing to me than even the best adults. Ella Connelly amazed me with her ability to transform her character from an innocent child, almost at a loss for words, to an eerie adult-like child, saying things that only adults say. Her cold delivery of several ominous lines is enough to send chills up the spine of most movie-going adults. I think people have an innate fear of children who act too much like adults. Ella Connelly gives Alice a most malicious and unforgiving character who is scary in and of herself, without makeup, special effects, or anything unnatural. Her ability to show Alice’s transformation is perfect.

I have heard some criticize Wake Wood for being too much of a horror film, not exploring the deeper themes behind the folklore and the “Rite of Return.” While I agree that this could have added more, I don’t think it was necessary. There is sometimes a danger in adding too much information to a movie that is largely about the mystery of it all. I was never bothered by the lack of specifics, because I didn’t see the room for it in the plot. Such exploration would likely have slowed the movie down, making it less effective, and too much unlike the horror film it is.


What Louise, Patrick, and all of Wake Wood do with a “rite” gone terribly wrong is where I’ll leave this review. What is done in the end, despite all that’s learned, is yet another step to stretch the limits of desperation. You’ll see what I mean. If this movie has any lesson, it’s simple—don’t let your passions overwhelm your common sense, or maybe it’s just, instead, don’t mess with dead things! 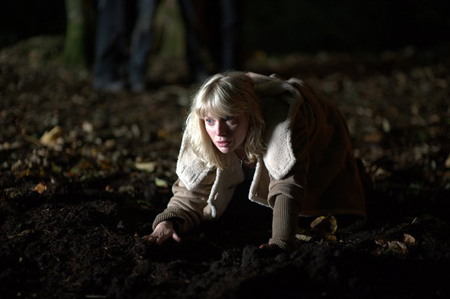 Bringing back the dead isn’t a new idea, but it works most anytime it’s done well—in movies, that is!  While Wake Wood may not be the “instant classic” it’s touted to be on its poster, it certainly stands alone as a great new horror film worth watching.  I myself like it enough that I’ve seen it twice already.

Wake Wood is a dark, modern folktale.  It is the type of story passed down for generations, as it likely has been somewhere, in some small village, or someplace we’ve only heard about in stories like this.  This is the story of two people who do something we think we’d never do.  It’s a story we’d never believe possible, unless maybe, in some moment of desperation, weakness, and hopelessness, we found a way, in spite of it all.  I say that Louise and Patrick are, in the end, more normal than we all might want to admit.  So, before you comfortably separate yourself too much from Louise and Patrick, look deep within yourself, within the abyss of who you really are.  You might just see the abyss staring back.

“On the wild wind ye fly, ‘tween, this world or the next.  From that twilight realm, you see o’er your perch, the trials of the living and the wake of the dead.” ~ Arthur, Wake Wood