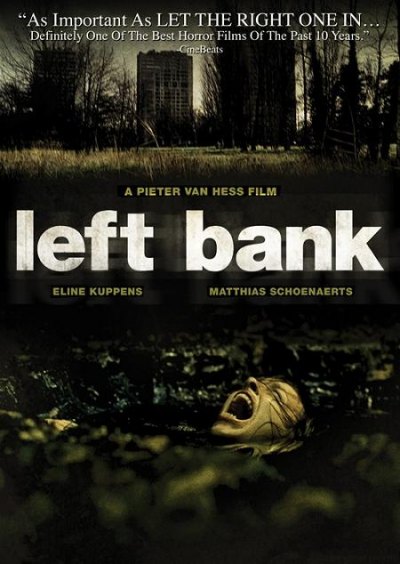 If I had only watched the trailer for Left Bank, I would have thought it was a fast-paced, action-packed special-effects-laiden horror film, possibly like the critics' blurbs written on the DVD cover.  Combining the two together, I might have even imagined that it was a four-star “remarkable tale of the supernatural,” and “definitely one of the best horror films of the past 10 years.”  I might have thought its credits as an “Official Selection at the Edinburg Film Festival” and “Fantastic Fest Film Festival” pedigreed this movie beyond me to judge.  Of course, I never rely on blurbs, trailers, and festival credits, but I do often, like most people, find them compelling.  They often tempt me to watch a movie I might not have otherwise. If I immediately reviewed a movie, comparing my thoughts and the blurbs, I might not even give the movie a fair review.  That’s why I always wait, at least till the next day, to review a movie, free from all the baggage, good or bad, it also carries.

After waiting, I see that, while Left Bank is far from the heights of its trailers and blurbs, it’s also far from being a “bad movie.”  Left Bank is mostly the opposite of its esoteric hype and alleged acclaim.  First, this movie is slow paced with minimal action.  There’s more action in the heroine’s running practices than there is in most of the film’s running time.  Left Bank is also barely, but still certainly, a horror film.  Hairs mysteriously growing from a wound and an apartment complex built over an entrance to Hell (or something like Hell) are just a couple of things that keep reminding us of that.

However again, is a good movie about the things Left Bank isn’t?   I say no.  Is the success of a movie more about its immediate effect or its condensed overall effect, after it settles in.  I say it could be either or both, with the latter being the case for Left Bank.  This movie, to use a fitting metaphor, impregnates you with thoughts, giving birth to new ideas about meaning later.
By now, you’re probably saying, “Come on with what the movie’s about already!”  Okay, I’ll try to do that without spoiling the minimal but, I believe, effective story.  Marie (Eline Kuppens) is an up-and-coming track star whose plans to compete in a championship are threatened when she’s diagnosed with a mysterious infection.  Further problems interfere, as if she’s destined, one way or another, for another fate—one that involves running only as a way to get away from something!   Through most of the movie, events are more tragic than horrific, punctuated by only moments of hope.  Sound familiar?  Left Bank could be any other movie about a person facing obstacles in the face of greater plans.  But, it’s not. 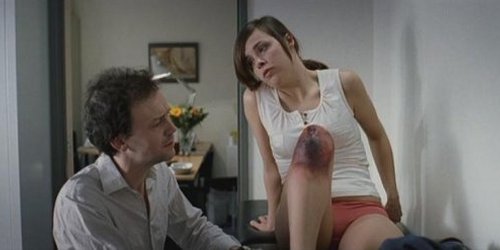 Marie’s relationship with a boyfriend, Bobby (Matthias Schoenaerts), is something that seems somehow ominous from the start, despite all we see.  I’m not sure if it’s because we know this is a horror film, or because we just think we know, too early to tell.  Finding out that Bobbie’s apartment is built over an ancient passageway to the underworld only makes us all the more sure we we’re right.  Or, are we?  Is he instead Marie’s savior, after all?  Or, could that be the other would-be boyfriend competing for the role—the one whose last girlfriend disappeared without a trace?  Why so ominous, you may still ask?  Could it be that people in this movie keep using the words Samhain, sacrifice, and underworld just a little too much?
Oh, I almost forgot.  How could I?  Left Bank has lots of sex, nudity, vomiting, and dirty panties.  Yes, you read that right—vomiting and dirty panties!  (I’m sure the sex and nudity didn’t surprise you.)  As for the vomiting, is it again because it’s a horror movie and people often vomit in horror movies?  Is it because of something else horrible, or something that isn’t really horrible at all?  Well, I’m certainly not telling you here.  As for the dirty panties, could it be that it makes no sense, and they just want to make us curious?  Could it be because of the most direct reason—someone wore panties while playing in the dirt and got them dirty?  Or, could it be that what appears to be dirt isn’t really dirt, but instead something even more ominous and strange—something otherworldly and evil?  Believe it or not, this is even more bizarre in the movie than it sounds here.  What sounds almost silly in a review is really quite creepy in the movie, as if I need to convince you of that.

Back to the nudity, on a serious note, there’s a refreshing voyeuristic realism about it, unlike what we typically see from Hollywood.  When Marie gets out of bed in the morning, after being with her boyfriend, she doesn’t pull the covers over her as if she knows we’re watching.  Instead, she gets out of bed as girlfriends really do, without covering up, without knowing that we’re watching.  Hollywood usually destroys the realism by reminding us that they know we’re watching, and it’s only just a movie. 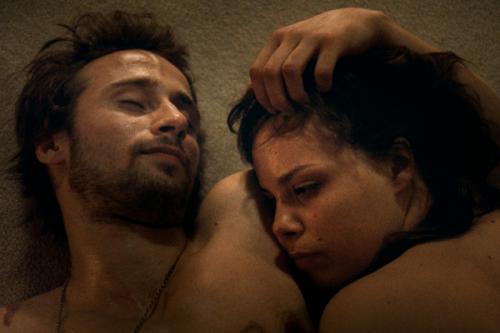 Oh yes!  How could I forget the nightmares?  No, not nightmares I had while sleeping during the film.  This movie is by no means a snoozer.  There are, however, some seriously kinky things going on in Marie's head, while she sleeps.  They are just as real nightmares are—surreal things, connecting to reality in bizarre ways, scaring us even when awake, to think of what they really mean about ourselves.  I’ll leave Marie's nightmares as daydreams for you to see; that is, if you can stay awake.  Just kidding again!

Left Bank is written and directed by Pieter Van Hees.  It’s in Dutch, with optional English subtitles on the DVD.  One good thing about the movie being slow is that it gives you extra time to read the subtitles, although some may call that a double curse.  Even though some will want to stop reading my review at this point, I say read on.  Many a good movie has been missed by those with subtitleaphobia—a fear of reading a movie’s dialogue and falling behind, while being distracted by a foreign language in the background.
As for acting, it’s excellent!  Performances are very real, natural, and convincing, from beginning to end.  One thing that helps achieve this is that slow pace of the movie.  There is none of the fast, choppy, Hollywood editing, confusing our senses, making us uncertain of what just happened.  The realistic pace gives us time to think about what’s happening, along with the characters, sometimes more so than we want.  In a particular scene with a frustrated Marie staring pensively out a window, we see her face long enough to know what she’s thinking—or so we think.  Most of the movie is much like this in its focus on the details of the moment.  Comparing this again to the movie’s trailer, it’s as if they took most of the action and condensed it into the minute or so of the teaser.  I hate it when that happens, but at least I didn’t watch the trailer first to spoil it all.

I could go on and tell you more, but more would be too much.  It’s best to leave the thread that connects these events for you to discover yourself.  As for me telling the meaning of the title Left Bank, don’t even think about it.  I’m not about to spoil that, no matter how many times you threaten to vomit and praise me with compliments I don’t deserve.  That's a secret I'll leave within the movie you for you to discover yourself. 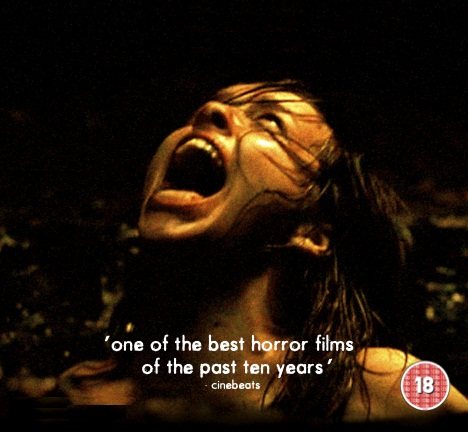 Even with the honest criticisms I’ve made, I must stress that I did like Left Bank.  It’s a refreshingly different movie that takes its time unfolding, teasing us, ever so slowly with clues as we wander along.  If you can muddle through its slow pace, there’s something thought provoking in the end, albeit something you may have thought before.  In the end, depending on how you think, Left Bank could be more spiritual and uplifting than it is dark and horrific.  That’s one of the great things about a good movie, be it slow or fast.  It allows us to think what we want, rather than telling us the only way.  Left Bank leaves those choices to us, whether we want them or not.  In the end, is it really the end, or just another beginning?  Can a unique life lost be found again, or is it, instead, a life lost forever?