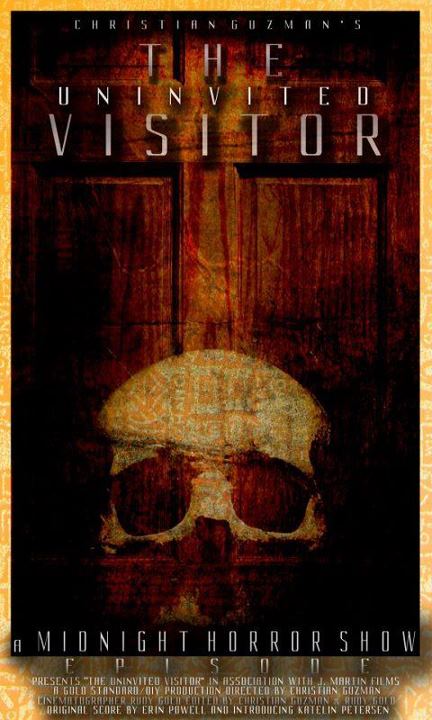 “When you have a midnight visitor knocking at your door, will you answer?”

A young blonde is disturbed, during the night, by loud knocking at her door.  She assumes it’s someone she knows (John, she says) doing something unwelcome he’s done before—perhaps playing a practical joke, or worse, being an ex-boyfriend stalker.  Who knows?  The possibilities are endless, but mostly bad; we know, from the tone of her voice, that she’s not sure who it is herself.  The typical bluffs are played—“I’m not the only one here,” “My boyfriend is here,” and “I’m gonna call the cops.”  Of course, these aren’t clichés in the movie so much as they are clichés in life.  These are the things that people say when they’re really afraid, and the truth isn’t enough.

What does the blonde do?  Does she answer the door?  Does she get killed or become a killer herself?  I’m not about to tell you much about a film under four minutes long?  You’ll have to visit yourself to find that out.  Let’s just say that she does more than a few things that we all do, for better or worse, when confronted with the ever-dangerous impulse called curiosity.  Yes, that instinctive urge, said to kill the cat every time, is no less determined to drag humans to their doom just as quickly.  “What’s at the door?” you ask.  No matter how many uninvited visitors knock at my door, I’ll never tell!

When you finish watching The Uninvited Visitor, you may ask why I reviewed it.  (There’s always a few who do, no matter what.)  You may wonder what there is to say about a film under four minutes that leaves you hanging like a worm on a hook.  I would say it’s because the film encapsulates, in its short time, the key essence of horror—that fear and dread of the unknown, somehow making us risk all to discover it.  It’s about how we all wind up being the dumb victim of our own horror film, when we least expect it.  Is it that the girl is really dumb?  No.  It’s mostly that she’s human.

What about that home-alone girl, you say—the one drawn to the knocking as much as she is afraid of it.  Well, she’s a cliché who not only works, but also invades our senses with a necessary condition for fear—being vulnerable!  She’s home alone, in the dark, in shorts and a T-shirt, barefoot, and something damn nasty is knocking loudly at her door.  The girl (Katelin Petersen) is a horror heroine as beautiful as any I’ve seen before; yes, beautiful babes always make a good horror film better, and Katelin sure makes this one better!  Young women, in general, define vulnerability in the minds of most viewers; however, could we see Katelin kicking serious “visitor” ass in an upcoming episode?  Could Katelin become the Ellen Ripley of short film horror?  Could she champion the feminists and add eye candy for the guys—as a spandex-suited superhero, perhaps?  Like Katelin, curiosity is all we have for now!  In the meantime, I’ll keep my fingers crossed. :)

Okay, I’ve paid homage to Kaitlin’s status as a horror babe worthy of watching for her looks alone.  I had to do that, because…well…she deserves it!  “But, can this curious cutie act too?” you say.  Yes, absolutely, I say!  Kaitlin does the job she’s on screen to do, infusing character in an otherwise generic role.  She approaches the door, as cautiously and unwisely as she must.  She speaks with desperation and dread that makes us believe, emphasizing threats and scaring no one.  (Not once did I believe there was a boyfriend with a “bat.”  Not once did I believe she wasn’t alone.)  And her looks—her ever-important appearance on screen—goes beyond her being a hottie!  Katelin looks, naturally and skillfully, like the girl next door, alone and afraid, helpless and naïve, able to protect herself from nothing.  Oh, and her scream—it’s perfect!  (It actually scared me more than the thing that made her scream.)  Before you think I’m describing things anyone could do, think again.  It’s not as easy to be afraid of nothing as you may think—the nothing on the set, that is.  It’s not so easy to develop a character, from anyone to someone, in under four minutes.  I’ve seen many people do it very badly!  Kaitlin does it like a pro--a seasoned screamer who's been scared many times before!  In less than four minutes, Kaitlin, as the girl, becomes apprehensive, scared, and finally terrified, not as a stranger, but as someone I know and like.  Keep a lookout for Kaitlin; I’m sure you’ll be seeing more of her soon enough.

With the directing of Christian Guzman and the cinematography of Rudy Gold, The Uninvited Visitor does the job of delivering horror in short order, with style as well.  All the fat is trimmed to serve up a lean scene of dread and suspense, without the typical fillers.  Rudy and Christian keep the camera at low angles, creating an eerie Peeping Tom effect—as if we’re watching from the cracks in the floor, or, perhaps, from under the door!  As the girl explores her now unfamiliar home, we, as the viewer, feel we are seeing it as the intruder; it’s as if we are oddly and uncomfortably participating in the terror inflicted on the girl—as if we are the intruder!  At other times, the camera shows us the girl’s perspective—or so we think!  Scenes are darkly-lit, with odd angles making things surreal as well as scary; shadows are menacing, but controlled, showing us just enough and never too much.  The editing, done by Rudy and Christian is also clean and well cut, just like the story itself.  It all flows smoothly enough, without plot confusion spoiling the buildup of tension.  In other words, when the “money shot” occurs, you’ll be focused enough on it to enjoy, or rather, be jolted by it.  You won’t be wondering what just happened here or there before.  Although you’ll get a helping hand, you sure won’t need it! :)

The original score by Erin Powell is perfect to compliment the 70s feel of the film.  Along with Erin’s score, Rudy Gold and Christian Guzman are able to pull off just the right retro effect.  The random, synthesized score keeps the viewer on edge, just as the girl, thinking anything could happen, at any time!  Music can easily make or break a movie, and Erin Powell’s score makes The Uninvited Visitor!

Possibly, the main reason I reviewed The Uninvited Visitor was to clear my head of thoughts it inspired.  You could even call them “uninvited” thoughts that just came wrapping, ever so loudly, at my chamber door—only that and nothing more!  “Quoth the Raven, ‘Nevermore.’”  Just like the girl in The Uninvited Visitor, my curiosity got the best of me; but, unlike the cat, the raven, and possibly the girl in the film, I’m still alive.  So, who cares!  Watch The Uninvited Visitor below!  Viewer discretion is not advised, but wise decisions are!

Double click on the movie to view it in full screen.