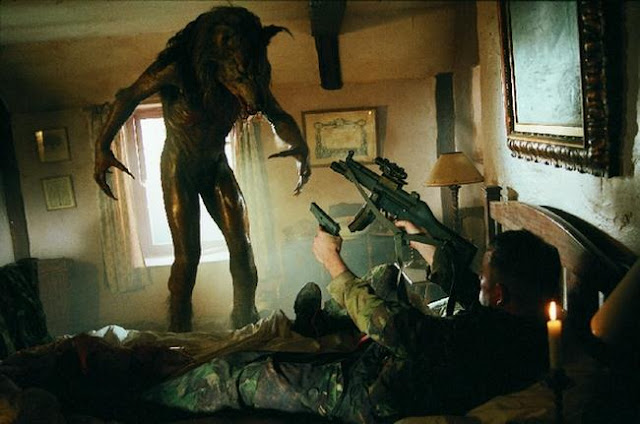 A British platoon out for an evening of routine war games gets more than they bargained for after finding the shredded remains of a nearby special operations team.  The soldiers soon become bait for a perturbed pack of 8-foot, hungry, upright-walking lycanthropes defending their turf.  Believe me, these wolves are such monsters that no man has a chance of urinating any higher on a tree, much less defeating them in combat.  Dog Soldiers has some very unique and formidable warrior werewolves engaged in serious, modern-day canine combat.

Why are the werewolves called “Dog Soldiers,” you may ask?  Well, if their soldier-style combat tactics aren’t enough, there’s a rather interesting subplot of a reason why, as well.  However, I’ll leave that morsel of a detail for you to discover yourself.

There’s even an ever-so-subtle, yet oh-so-distinct undercurrent of a Red Riding Hood/Goldilocks theme.  Maybe it’s just me, maybe it’s not really there, but I doubt it.  If anyone else watches this movie, let me know if you see it too.

Dog Soldiers involves human and werewolf soldier combat, with a serious use of guns, explosives, and various other military tactics, weapons, etc.  There’s lots of bullets flying, lots of things exploding, lots of blood, lots of entrails, carnage, and other varieties of violence and gore.  Blood and human remains literally gush from the opened doors of a car, in one scene.  There’s also a tug-of-war between a dog and a disemboweled soldier that’s really better seen than described.  I’d actually rather die than receive some of the first-aid administered in this movie.

Yes, Dog Soldiers, I think, very deeply sinks its teeth, so to speak, into the theme of War/Horror, doing so in a most unique and frightfully original way.  Watch it at your own risk, and, by all means, avoid a full moon if you do!