Yes, There Will Be Blood! 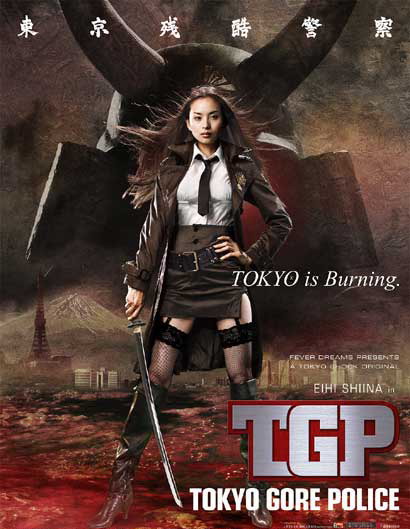 This movie is so graphic in so many ways that I had to edit my original review in order to make it decent for the general public.  So, if, after reading my review, you think this movie’s extreme, then multiply your expectations by about ten to be prepared for it.

In the not-too-distant-future, “engineers” and their genetically-altered spawn are able to generate mutated bio-weapon appendages from their wounds.  The police have become privatized for “the good of society,” as their motto goes, and specifically to eliminate the “engineers” and their bio-engineered spawn.  Claiming to be a better, more effective instrument for civil control, the Tokyo Police Corporation, as it’s called, also ironically carries out summary executions of anyone, for the largest to the smallest of crimes.  This is all done in the name of justice, efficiency, and eliminating “engineers.”  In one scene, for example, a man’s hands are cut off for copping a feel on a crowded subway.  In another scene, a call-girl madam is dismembered and impaled, through the mouth, with the wooden handle of a garden tool.  Does retribution really get much better than that?  I doubt it.

Oh, yes!  There’s also the main character Ruku played by the gorgeous Eihi Shiina!  (What would a movie like this be without such a babe?)  She’s a crack, bad-girl engineer-hunter, motivated for revenge, after seeing her father killed by an engineer, as a child.  Ruku is serious eye candy, gracefully kicking butt in all her perils, and always looking good enough to turn heads on or off a body.  She even looks good with half her face blown off, a mutated eye, and a claw-like, genetically-altered arm appendage!  Yes, trust me, this woman cannot look bad!

As with most unchecked forms of government, corruption is the result, and this movie has just that as part of its message.  Beyond that, there’s not much else mental about it.  However, that’s not a bad thing here at all.  Anyone who watches a movie titled Tokyo Gore Police wants one thing for sure—gore, gore, and more gore!  Well, this movie will certainly NOT disappoint in that area.  As the title implies, there is, indeed, gore aplenty.  From the first seconds of the movie, the viewer is soaked in scenes of blood, carnage, and gratuitous violence.  The first scene of the movie involving an “engineer” with a chainsaw sets an over-the-top tone from the start.  This scene will have you ducking and dodging, or looking for your raincoat, even as a viewer.

The violence and gore in this movie are excessive throughout.  There are numerous decapitations, dissections, dismemberments, disembowelments, and heads split in half.  In every scene, blood sprays from wounds like water from a hose, for periods far longer than anything remotely possible.  Yes, this movie is far from realistic, but no less effective as a result.  The excessive blood, violence, and gore, along with over-the-top personalities and plots, give this movie more of a live-action comic book look.  Ironically, the pulp effects also help to tone the movie down to some arguably reasonable level.  Anything more realistic in a movie this gory would be impossible to market as entertainment, by any stretch.

Of course, there is the inevitable and necessary heroine/villain showdown in this movie.  No other end could make it complete or worthy of viewing after a point, anyway.  The bad guy and the good gal go at it to the bitter end with results I won't spoil here.  However, as I said, the good gal Ruku still looks good anyway.  So, who cares?

Again, this movie is clearly NOT for everyone.  It does, however, satisfy a serious gore fan’s niche for the more extreme in violent, over-the-top cinema.  If you’re one of the lucky lover’s of copious carnage and blood, then, by all means, dial 911 for the Tokyo Gore Police today!