PROMETHEUS: Thinking Back and Ahead 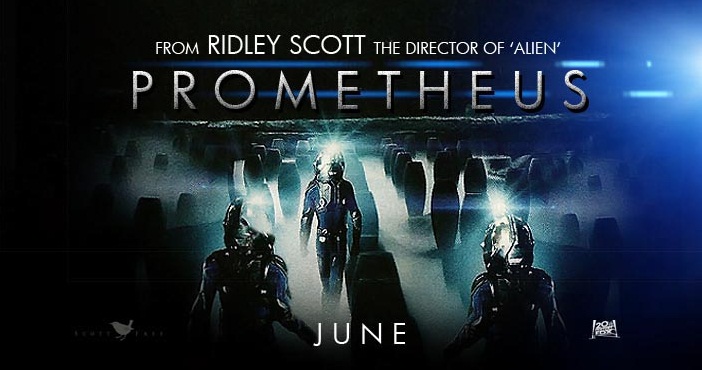 I will never forget seeing, for the first time, the Space Jockey, in his alien cockpit, fossilized on the big screen.  Since then, back in 1979, I have, with each repeated viewing of the movie Alien, only imagined the mysteries behind this surreal specimen, preserved and painted permanently in my mind.  Giger's work of art, his ancient alien, had come to life, even in its death, with a past I wanted to know.  Who was the Space Jockey? How did he come to be where he was?  What was he doing?  Where did he come from, and where was he going?  Even though he was really but a prop, likely discarded or destroyed long ago, I wanted to know, as if he was still arrested for all times, on that alien planet, in that cavernous shell of his derelict ship.

I have always hoped that, someday, the Space Jockey's story would be told in a way that the most dedicated fans would hope for and appreciate.  Yes, I would have also said, as if asking too much, that I want it to be done by a director who knows the origins and continues the story with a passion that gets it right.  Well, as I'm sure everyone knows by now, that story is being told, finally, by none other than Alien's original director, Ridley Scott.

So far, I've been lucky enough to get most of what I always wanted--an Alien prequel done by the right director!  All that's left (and it's a lot) is for this story to be something I can happily add to the the narrative I so love in the original.  Yes, I have high hopes that Prometheus will be the movie that was meant to be, with a story that could never be anything more than what is finally told.  The mystery was great; now, I'm hoping the truth is even better.

Of course, I'm a realist as much as I too consider myself a surrealist. So, I know there is the possibility that Prometheus may not be what my mind expects. That is the danger in liking the first movie too much; that is the danger in writing the story in my own mind first. That is the consequence of having 33 years to think about it.

Yes, I have heard the rumors about the Space Jockey (as we have seen him) being the exterior of a biomechanical space suit! I have heard rumors that that he (or she, or it) is an ancestor of humans, an "engineering" god of the universe, and so on. I have also heard that all of what I have heard is but a rumor started by Ridley Scott himself, only to surprise us all the more in the theater. Who knows if any of it’s true, but it sure gets the atomic wheels of my interstellar mind spinning all the faster.

Yes, expectations are indeed the darndest things! Coping with them can be a real pain in the brain! In the meantime, I'll just be happy that there is a prequel at all. It's at least consoling to know, finally, that, in space, someone can hear you scream.

If you're interested in taking a peek at the future, here's the trailer: