Better Than Your Worst Nightmare! I have read reviews that praise Laid to Rest as one of the best movies of its kind, while I have also read those that condemn it as one of the worst.  Ultimately, with this movie most especially, it’s all about what exactly one expects from a slasher film.  If it’s an information-rich plot that explains who the killer is, why he’s killing and/or specifically why he kills who he kills, you will be sorely disappointed.  Otherwise, I think you will be most highly pleased, as I was.

Laid to Rest, quite honestly, has some of the most brutal and graphic kill scenes I’ve ever seen in a slasher film.  What’s more is that these kill scenes are given more on-screen time for the viewer than those in most any other I’ve seen.  The camera never cuts away too soon, and, for better or worse, little is left to the imagination.  For example, when a certain victim gets a knife through the head, the viewer sees a most uncommon amount of detail.  When the knife is finally pulled out of the impaled head, the victim appears to be truly real, with bloodying eyes twitching, and skin on the head pulling and stretching, as the knife is removed.  To be honest, I’m not even sure how they did it.  Yes, one can quickly tell that director Robert Hall loves the genre with a passion, since he goes all out to satisfy his fellow fans.  Such exceptional gratuitous detail is dished out more than once in Laid to Rest, as each victim is eliminated by Chrome Skull—the stylishly-masked psycho slasher.  In other scenes a victim’s head is filled with air, through his ear, via a tire flat-fixer, a woman’s head is sawed off, and a man’s face is literally chopped off of his head.  Don’t worry.  I won’t spoil everything.  I’ll leave the excessive details for you to witness yourself.

Speaking of Chrome Skull, here is a killer that is as original, vicious, brutal, and scary as he is lacking in personality and/or background.  This villain literally comes from nowhere and kills everyone he kills for no particular reason that is ever explained.  Chrome Skull has no context.  There is not even a hint of who he is and why he does what he does.  From the film’s very beginning, a woman wakes up in a casket, escapes, and quickly finds that she is being pursued by someone trying to kill her.  From that point, everyone with which the woman comes in contact is either killed or meant to be killed by the villain.  The viewer never knows why anything is happening, and never has as much as a single clue to make an inference.

Yes, this lack of context is one of the main criticisms I've read about in many other reviews.  However, in all truth, exactly how much of a difference does context ever make in such movies anyway?  So what!  If anything, we get the clichéd, dicey background about some vengeful social misfit who vents his rage on those who arguably deserve it and/or society in general.  Yes, is it ever that much different, and how much of a difference does it ever really make?  Is that really why we watch such movies anyway?  Of course not!  In reality, we mostly watch slasher films for the very things that Laid to Rest concisely and copiously delivers—blood, guts, gratuitous gore, and killings galore!  No pedigreed gorehound can walk away from this one without at least being satisfied on that level.  If you want more, maybe you’re looking for something different anyway.  Maybe wanting more and watching Laid to Rest is like watching a movie you know you won’t like, just wanting to gripe about something.  Well, from this point forward, let it be known that you have been warned about what exactly this movie is.  From this point on, if you watch it anyway, spending your time and money on it anyway, then maybe it’s really you who should be criticized. 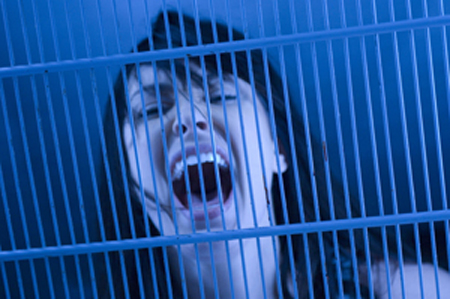 Laid to Rest is much like a bad dream, if that’s not exactly what it is meant to be.  The setting is almost surreal at times, the inhabitants don’t always act as they should, and reality is not always what it should be.  No, the movie doesn’t make total sense, it doesn’t answer enough of our questions, the logic is not always what we want, and even clues are nonexistent.  However again, like a bad dream, it is sufficient to accomplish the goal it pursues.  It delivers, very concisely and thoroughly, one very effective nightmare of a movie.