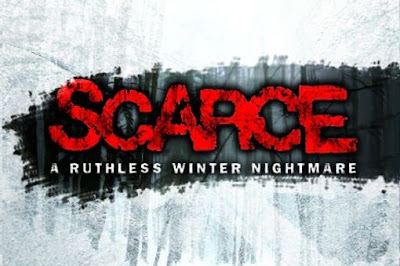 Scarce is the story of three guys, traveling across country, who get lost and wind up in hillbilly hell.  You might already be saying, “Okay, I’ve seen this before.”  But wait!  This one actually has some qualities (if you can call them that) that make it stand out and take a respectable place on the must-see list of such movies.   While the title may indeed be scarce, it is certainly one to seek out.

Scarce gets off to a good start with a naked man drenched in blood, running frantically through the woods, attempting to escape something or someone unknown. From there, the movie switches to a party scene, loaded with goofy dialogue and behavior that insults even the most brainless party goers. There, the fast women are too fast, and the libido-loaded men are oddly too slow. Sex and nudity are there just for the sake of being there, and fan service is the likely goal. Judging from the credits, the director knows what he’s doing here and intends every bit of it. Some characters from the party are even named “Gratuitous _______ #1 and #2” in the credits. I’ll leave it for you to discover what goes in the blank.
After the brainless party scene, the movie speeds up again and makes up for the slow time earlier.  It’s as if the viewer is suddenly watching a different movie.  The tone becomes more serious, and the actors even seem to act better, or at least more “professional”.   Yes, after the party, it’s full speed to the slaughter!  No, I wouldn’t normally say that, but in a movie like this, we all know where it’s going anyway.
The performance of Steve Warren (who plays Ivan) is what really makes this movie stand out.  From his first appearance, smiling proudly with rotten teeth, we know we’re in for a treat.  This guy is creepy, even when he’s trying to be “normal”.  I’m not sure if it’s bad acting that coincidentally works for this character, or if Warren does it all with the calculated finesse of a seasoned professional.  In any case, he nails the part from the start.  This guy is a true caricature of a rotten-toothed, down-home hillbilly, naïve only in outward appearances.  He has the stereotypic behind-your-back stare of a killer down to an art, as well as the fuax-normal behavior you’d expect from a backwoods deviant up to no good.  Yes, this guy personifies a sense of dread about what’s coming, from the moment he shows up.  From there, it’s hard for audiences of this film to be disappointed. 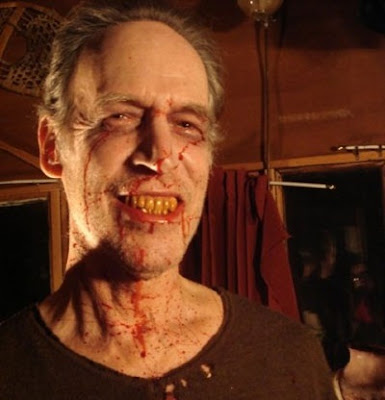 Refreshingly, after the opening party scene, there are no more people doing anything particularly dumb.  The deviants do what deviants do, and the party-going guys do what all party-going guys do when they get caught by deviants.  They start acting like they have some sense, or at least develop a maturity about trying to escape and avoid death.   (Yes, it’s amazing what a little selfish drive to survive will do to even the most witless of party fiends.)   As a matter of fact, the later realism is an effective, ironic contrast to the moronic behavior earlier.  It somehow makes the movie seem even more real, for better or worse.  For example, while the victims are running for extended time through actual snow, they are also actually barefoot and half-dressed, falling in the snow, and surely also as cold as they look.   The viewer can nearly feel the pain in such scenes.  Yes, I actually felt cold just watching it!
As for ironic contrasts that increase impact, there are also the dry but obvious doses of dark humor throughout.  For example, Ivan’s line about the ultimate fate of his victims (repeated just before the credits role) is an example of the darkest of cult-film dialogue.  This line alone is likely to live on for some time in the minds of most viewers.  I won’t repeat it here for more than a few good reasons.
As for the expected blood and gore, there is more than plenty.  Yes, the gore is even gratuitous here, in as much as it can be gratuitous in such a movie.   There is cannibalism, as well as graphic depictions of what cannibals do to prepare a meal.  We don’t just hear the cleaver chop; we also see what it chops.  Yes, the scenes linger on the gore, letting the viewers soak it in, whether they want to or not.  There are also various acts of deviance that I won’t go into here for reasons of decency as much as for avoiding spoilers.  I’ll let you discover those for yourself.
Scarce is unsettling too many times to count, but, of course, that’s how such movies are supposed to be.  Without being unsettling, deviant, and gory, what value would there be?  Without all that, it would be just another movie about a bunch of rotten-toothed deviants who sit around and just think about being rotten-toothed and deviant.  Or, perhaps I should say that it would be the only such movie.  I say seek out this “scarce” gem of a movie!  If you’re like me, you’ll be glad you did.