Bad Karma Bunker or What Comes Around Haunts Around! 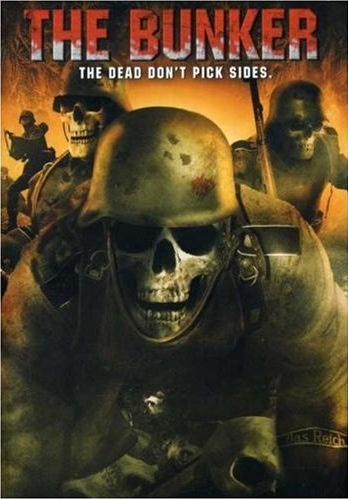 The Bunker is about a group of WWII German soldiers who take refuge from advancing Allied troops in a bunker haunted by their own personal demons of war.  It's an ultimate example of bad karma, with victims of war crimes coming back around to victimize their killers--hence "The dead don't pick sides."   I guess you could say that these soldiers should have just taken their chances and surrendered to the Allies!

Before I go any further, I should tell you something possibly disappointing.  There is not one undead zombie skeleton soldier, such as those in the poster above, appearing anywhere in, on, or around “The Bunker,” during the whole 88 minutes of its running time.  Yes, you heard that right!  This alone could leave The Bunker a dud on the battlefield for more than a few fellow gore hounds out there.  I’m always expecting the worst, when I see illustrated package art; it makes me think they couldn’t find a good enough scene from the movie itself.


However, even without the skeleton zombies, I still liked The Bunker.  It’s more pensive than most such movies, with far less obvious interpretations of events and meanings.  For example, I'm not sure how much is going on in the minds of a few demented soldiers and what's really happening on a true supernatural level.  However, I think the not knowing for sure and the multiple interpretive levels are part of the charm here.  Since we get a number of soldier perspectives, rather than what is always one objective view, who knows?  It could be either, both, or any way you chose to analyze it, I suppose. In any case, who cares? It's a war/horror movie, after all. 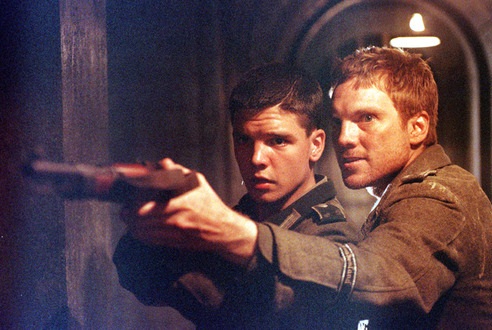 The Bunker is surprisingly well acted, but there’s British accents abound!  Yes, you heard that right again!  The Germans are speaking with British accents!  Even the word “bloody” (while literally appropriate for movie events) is used by a German soldier as British slang!  Yes, it was distracting for a moment, but I got over it soon enough to enjoy the rest of the movie.  I do excuse movies about soldier ghosts (or whatever they are) from such movies, most of the time.  Besides, it wouldn’t be the first time I’ve watched an otherwise good German war movie in English.


This movie is also not as heavy on the blood and gore as some others in the genre I've seen, such as Outpost (also reviewed here).  So, all you gore hounds out there may have to look elsewhere for that too.  As I said earlier, it’s really more of a psychological, thinking man’s war/zombie movie, if you will.  There are horribly-burned soldiers fighting to the point of unbelievable stamina, a soldier being stabbed by an unseen something or somebody, and more than one example of demonic possession (or just simple insanity).

As you might have already guessed, I am quite partial (and at times even a bit biased) towards war/horror movies.  Some will obviously consider this one total trash (or rubbish, as the British would say), so be warned in advance.  It's about how much you enjoy watching a war/horror movie, while having the freedom to draw your own insightful conclusions from multiple perspectives.  Or, maybe it's just about how much of a gore hound you are.  From here, I’ll let you decide for yourself.