FIVE ACROSS THE EYES

Horror in the Eyes of the Beholder 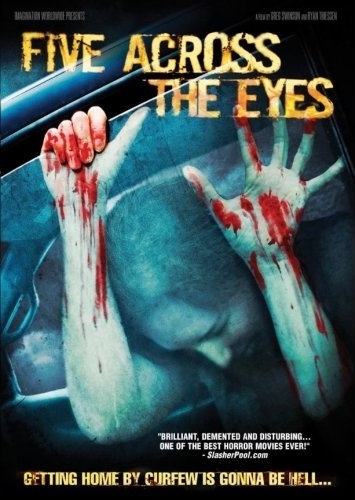 Five Across the Eyes is a truly horrible movie.  However, before you interpret that, stop and think.  Shouldn’t all good horror movies be horrible?  Well, Five Across the Eyes is indeed truly horrible in just about every way.  As I watched the movie, I wanted to dislike it, but somehow I couldn’t.  Somehow, I liked it anyway, despite its flaws, its sometimes annoying dialogue, its frequent sub-par acting, and other nauseating, stomach-churning acts of depravity.

What’s it about?  It’s simple.  A group of teenage girls are out, at night, driving on a remote Tennessee road called “_________.”  Yes!  That’s right.  I removed the name of the road.  I decided that it gives too much away.  In an earlier draft of this review, I had also explained the meaning of this movie’s bizarre title, Five Across the Eyes.  However, on second thought, I remembered how much mystery and allure there is in a good title.  So, I removed that too.  I remembered how we sometimes watch movies mostly to see what the title means.  This title, for sure, gets my highest score for one that sucks you in!

Anyway, back to the teenage girls, they become hopelessly lost on that road in the middle of nowhere.  But wait!  That’s just the start of the horror to come…of course.  There are car chases and car chases (yes, I repeated that on purpose), lots of screaming, yelling, cursing, vomiting, and violence (violence which may not be gratuitous, under the circumstances), and overkill unlike overkill you’ve seen before (I guarantee it!).  Truly appreciating this movie requires watching it till the end; trust me on that!  Here, the climax of revenge is what we always wish for in such movies but rarely see.  The ending is odd, sick, well earned by the victim, and the most common-sense way to solve the problem.  (You’ll see what I mean.)  Yes, rarely do we see such morbid intelligence in a movie of this kind.  Compared to the typical dumb victims in most horror films, the girls in this movie are geniuses.  No, I’m not telling you the ending, but I’m almost feeling guilty making you more curious to see it.  I should probably tell you everything to make you NOT want to see it. 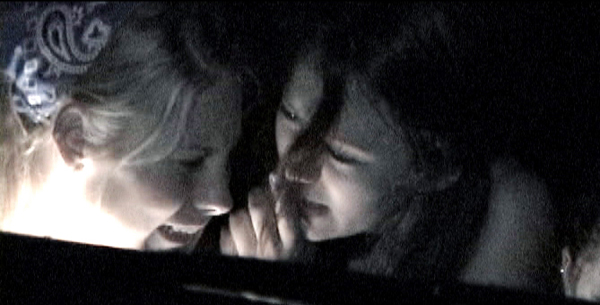 The film is certainly as low budget as low budget gets, but that’s the charm here.  The acting is bad at times, but the actors have the excuse of likely never having acted before.  The dialogue is sometimes bad, but likely no worse than what real people (in this case, teenagers) really say when they’re out driving, at night, lost, in the middle of nowhere.  The film is dark and grainy, sometimes making it difficult to know what’s going on, even when the camera is on it; however, as the viewer, we get the feeling that we’re lucky to be seeing it at all.  The camerawork is a shaky mess of ultra-realistic, real-time action that could arguably be called more coincidence than planning, but again, that’s the charm.  With such frenetic movement (car chases and running on foot), the viewer becomes as nauseated as the victims in the movie.  It’s what we see and don’t see, sometimes by chance, through the lens of a handheld camera that, again, gives this movie its charm.  Yes, the charm is often in what we don’t see but nonetheless know and see too well if not better in our own minds.  (The scene with the toolbox dental job comes to mind here quite vividly; I actually felt my teeth ache watching it!)  As the voyeur in this movie, we are treated to more or less, for better or worse.  One often wants to see more of what one shouldn’t see, sometimes forced to settle for ample off-screen screams and groans, while other times seeing what is arguably too much.  Yes, this is all nonetheless “horrible,” as again, maybe good horror films should be.  Just to know what is happening should be enough; however, we often feel not just bad for watching it, but even worse to want a front row seat.  Yes, this movie actually makes horror fans feel bad about being horror fans.  Imagine that!

Considering the simple plot, carried mainly by realism, realism, and more realism, any such movie polished by could not have sustained itself beyond the first few minutes.  would have made it look too well-planned and ineffective for its ultimately base and brutal purposes.  Yes, this movie has but one purpose—to be brutally horrible, for the pure and simple sake of being brutal and horrible.  There are no redeeming moments; there is nothing to be learned; there is nothing to make any normal person feel good about having watched it.  It is purely and simply a vile and disgusting film.  However, a “vile and disgusting” horror film may not be as bad as it sounds.

If you watch Five Across the Eyes, it's easy to cricicize it too much, simply because its so low budget, rather than just for its vile and disgusting intensity. It was obviously made for next to nothing. I corrected my own initial lower score, remembering this and how it all really makes the movie better, for what it is, anyway. With more money, there's no telling what directors Greg Swinson and Ryan Thiessen could have done. Lots of people do a lot less with a lot more money.

I suspect that most people will not like Five Across the Eyes, no matter what.  Most people will not admit that they like it, even if they do.  Surely, some will even curse me later for giving them enough curiosity to watch it at all, to spend even a moment considering it, even a pittance of money renting it, let alone buying it.  So, if you do watch this movie, don’t say I didn’t warn you of more than a few things that could make you wish you hadn’t.   Yes, somehow, I liked Five Across the Eyes, despite the fact that it’s a horrible movie about horrible things that people probably shouldn’t be watching anyway.  However again, I suppose that the best horror movies should actually be as horrible as this one, if not worse.

Five Across the Eyes is a true feast only for the most devoted horror junkies--those unconcerned about the little things that make a movie less than perfect, less than Hollywood, and perhaps, more refreshingly, far from typical.  If you are one of the uncommon fans who fall into this niche, then sit back and enjoy (with guilty pleasure aplenty) this movie that goes off the beaten path, literally and figuratively, into places you may never want to go again.

Email ThisBlogThis!Share to TwitterShare to FacebookShare to Pinterest
Labels: Horror